Getty Xander Schauffele of the United States stands with caddie Austin Kaiser on the third green during the first round of the Masters at Augusta National Golf Club on April 11, 2019 in Augusta, Georgia.

Xander Schauffele’s caddie Austin Kaiser was his college golf teammate at San Diego State University and has been on his bag since 2015. Kaiser and the 25-year-old Schauffele are making a major splash at the Masters in 2019, with Schauffele sitting in a tie atop the leaderboard with Tiger Woods.

Schauffele has had Kaiser on his bag as his caddy for almost his entire professional career. Schauffele, a San Diego, California, native, turned pro after playing for three years with the Aztecs at SDSU. Kaiser is also a California native. He grew up in Atascadero. Kaiser golfed for two seasons at Allen Hancock College before joining Schauffele at San Diego State for the 2012-2013 and 2013-2014 seasons.

The duo had some growing pains as they shifted from teammates to a golfer-caddie relationship, but things have been smooth sailing in recent years. Kaiser helped Schauffele earn the PGA Tour Rookie of the Year award in 2017.

Here is what you need to know about Xander Schauffele’s Caddie Austin Kaiser:

He Almost Became a Cop Instead of a Caddie

“I finished schooling and was actually going to be a cop,” Kaiser told the Atascadero News in 2018. “I was signed up and ready for the police academy and I was about two months from going through all my schooling for it when Xander calls me and goes, ‘Hey I need a caddie and I think you would be great. We’re buds and you know my game more than almost anybody.’ So I told him I would give it a try…”

Kaiser then helped his college pal earn a spot on the PGA Tour.

“So we went to Web, go through that and we were actually the first people out to get their PGA card,” Kaiser said. “It was kind of a bummer, but they had a playoff season where you can also get your card and that’s how we got our card.”

Kaiser said the role of a caddie has changed.

“The caddie has evolved completely,” Kaiser told his hometown newspaper. “It used to be just carry the bag, keep up, don’t talk, literally the pro is responsible for everything. Now it has switched to more of a team aspect, I actually read an article this morning about the top guys and how they are using their caddie as a bounce-back conversation mechanism for choosing what club to hit, what shot to hit, where to hit it, so it is more just making sure he is aware of everything around the green.”

He added, “It’s just giving him scenarios essentially and kind of giving him information that he might not be aware of.”

Schauffele gave Kaiser credit for turning his pro career around during his rookie season.

“It was probably a combination of everything. Nothing switched. Maybe my brain flip-flopped. Coaching, technique, everything was the same the entire season. I definitely got more mature. A lot of it was my caddie though. He’s also a rookie, my teammate in college. It took us the first half of the season to figure out how we tick. Now we seem to be sailing pretty smooth,” he told PGATour.com. 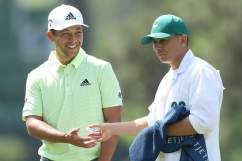 Kaiser Idolized Tiger Woods & Jason Day When He Was Growing Up

GettyXander Schauffele of the United States poses with caddie Austin Kaiser and the trophy after winning the Sentry Tournament of Champions at the Plantation Course at Kapalua Golf Club on January 6, 2019 in Lahaina, Hawaii.

Like many young golfers, Austin Kaiser idolized Tiger Woods when he was growing up. Kaiser and Schauffele are now competing with Woods down the stretch of the Masters. But Kaiser also was a fan of another big star.

“We have met Tiger, we haven’t talked too much to him. Just kind of walk past him in the locker room and saying, ‘What’s up?’ Kaiser told the Atascadero News. “But I grew up really liking Jason Day and we have played with him twice already by now and I think that is the most starstruck I have been because I grew up idolizing him almost more than Tiger.”

After transferring to San Diego State, Kaiser immediately became a key part of the Aztecs golf team, according to the school’s website. During his junior season he started 12 of 13 tournaments and, “Ranked fourth among Aztec regulars with a stroke average of 73.97 and posted four top-20 finishes.”

He also became closer friends with Schauffele while there.

“I figured he was a good resource for me to go to,” Schauffele told the SDSU website. “I think he enjoys being out there on the course. He keeps it easy on me and I keep it easy on him. We just have a lot of fun out there. I think the alumni connection at San Diego State University runs pretty deep, and everyone is really happy to be an Aztec.”

READ NEXT: Tiger Woods’ Girlfriend Has Kept a Low Profile in 2019