Getty Drake appears to have Steph Curry and Kevin Durant tattoos which he covered up with an arm band during the NBA finals.

Drake may have the Global Ambassador role for the Toronto Raptors, but his affinity for the Golden State Warriors has been well-documented. Not only does Drake have tattoos of Steph Curry and Kevin Durant’s jersey numbers, but the rapper has mentioned the Warriors in a number of his songs.

After fans speculated that Drake had tattoos of Curry and Durant, Drake essentially admitted to it by wearing an armband around his bicep during the NBA finals. One side has the No. 30 with the text “gifted” while the other features No. 35 along with the words “snipe” which is a nod to Durant’s social media handles.

As if the Warriors tats were not enough, the rapper has a number of songs that reference Golden State. One of Drake’s most iconic Warriors lyrics is “0 to 100/The Catch Up” where the rapper praised Curry’s jumper.

Drake referenced Oracle Arena and Durant in “Free Smoke.” USA Today reported the Cavaliers censored the song during the 2017 playoffs.

I took the team plane from Oracle/ Mama never used to cook much/ Used to chef KD/ Now me and Chef, KD/ Bet on shots for twenty G’s
I brought the game to its knees

Drake may not have a tattoo featuring Draymond Green, but the Golden State big man is another player the rapper references in his music. Drake compared Green to his bodyguard in the song “Summer Sixteen.”

Green and Drake exchanged words during Game 1, but there does not appear to be any ill will between the two. Drake and Green shared dinner together prior to Game 2, per NBC Sports. Green was also seen rocking an OVO hoodie, a nod to Drake’s record label. Green spoke glowingly about Drake even after the altercation, per the New York Post.

“He’s a fan. He talks and it gets more attention because he’s Drake. So many people are complaining about it, like, ‘You don’t let any other fan do that.’ Yeah, any other fan is just not Drake, so they probably shouldn’t be able to do that. That’s just kind of how the cookie crumbles.

He’s worked his ass off to be who he is,” Green said. “I think we all know when you do that, you get more leash than others. I think there’s so much talk and ‘the NBA needs to’ — no, they don’t. He worked to be who he is; you should get more leash. But I don’t mind it. It’s fun for me.” 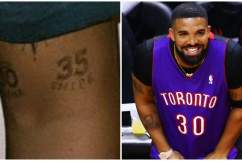