Twitter Kailon Davis stole the show on "Last Chance U."

Kailon Davis is one of the main players featured on the latest season of “Last Chance U,” and the good news is you can watch him play this upcoming college football season at Arkansas State. Davis chose the Red Wolves over a number of other programs after shining at Independence Community College.

Davis was a three-star rated recruit with additional offers from South Alabama, Southern Miss, UAB and Western Kentucky, per 247 Sports. Davis used his “Last Chance U” stint to dramatically improve his stock from being an unrated recruit coming out of East St. John High School.

Davis is one of 17 early signees who officially committed to Arkansas State. Davis was one of five defensive linemen who committed on early Signing Day, per Fox 16. Red Wolves head coach Blake Anderson discussed his early signees which included Davis.

“I thought it went well today, and overall I think we got a really solid class that meets our needs,” Anderson noted, per Fox 16. “We’re not quite done with it yet and still have a few spots to fill, so we’ve still got work to do. Today wasn’t extremely chaotic and was pretty calm down the stretch. I think our coaching staff did a really good job over the course of the recruiting process to get guys locked in, and they’ve been settled on us for a while.

You can follow Kailon Davis (@kailondavis1) this fall on his journey from Indy to Arkansas State pic.twitter.com/QHvH5sMT5K

Davis is expected to play defensive end at Arkansas State. KAIT 8 provided a brief bio of Davis’ accomplishments during his two years at Indy.

Davis became a fan-favorite in Season 4 thanks to an energetic personality, dedication in the classroom and an odd affinity for air fresheners. Esquire called Davis a “charmer who should be an instant fan-favorite” in their review of the latest season of “Last Chance U.”

“Last Chance U” fans have been vocal about their support for Davis, especially his relationship with English professor Heather Mydosh. Many are looking forward to keeping up with Arkansas State this season and seeing Davis play on the field.

“Sounds like the fan favorite from Season 4 is Kailon Davis (@kailondavis1) You can follow him this fall at Arkansas State,” Last Chance U Alum tweeted.

The same account also tweeted out this funny meme joking about the 20-page paper Davis completed in Mydosh’s class.

As Davis heads to Arkansas State, it will be interesting to see what happens with the next season of “Last Chance U.” There has yet to be an announcement for where the show is headed for Season 5. 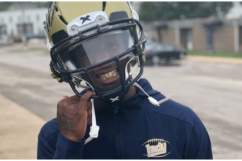