Davante Adams had a career game against the Eagles, but the night ended on a down note after sustaining a turf toe injury in the second half. Adams’ specific return timeline depends on the severity of the turf toe injury. Turf toe can range from Grade 1, not as serious, to Grade 3, the most severe type, per Rushford.org.

While the Packers have not disclosed the full details, Adams’ injury may not be as severe as initially feared. NFL Network’s Ian Rapoport reported that Adams may not miss much time.

“Packers WR Davante Adams had his MRI today on his toe injury, and sources say it’s not believed to be serious. The team will be careful with their star pass-catcher. But if he misses time, it may not be much,” Rapoport tweeted.

Heading into Week 5, Adams will at least have a few additional days for recovery since the Packers played on a Thursday night. After the game, Adams admitted that the injury was so painful that he was not able to put on his shoe.

“We’ve got to check it out,” Adams explained to ESPN. “They looked at it a little bit now, but we’ll look at it more tomorrow and get a better idea about where I’m at.”

We have seen players like A.J. Green initially suspect they had turf toe only to realize the injury was more severe than expected. We should have a better idea of the severity and Adams’ return timeline heading into the weekend after the test results are revealed. Rushford.org defines turf toe as a “hyperextension of the big toe or, more technically, a hyperdorsiflexion injury to the first metatarsalphalangeal (MTP) joint — the ‘ball’ of the foot.”

Adams appeared to sustain the injury after being tackled and his toe got caught on the field.

“It [turf toe] is a hyperextension injury of the first metatarsophalangeal joint, and can occur with forceful push-off or if another player falls on back of the heal, driving this joint into a position of hyperextension,” Dr. Rios told Rushford.org.

Adams had a career game despite missing time after the toe injury. The Packers wide receiver notched 10 receptions for 180 yards against the Eagles. After the game, Adams was clearly disappointed that he was not able to help his team pull out a victory.

“It sucks,” Adams explained to ESPN. “You feel like in situations like that, you let the team down. Obviously I would’ve been out there if I could, but I’m in a little bit of pain, and it was tough. With a toe injury and the type of player I am — what my game is based on is explosion and things like that, so if I can’t get out there and really do my thing how I want and I’m in a lot of pain, I’m sure my teammates understand that.” 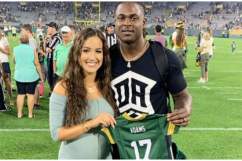 Read More
Fantasy Football, Football, Green Bay Packers, NFL
How long will Davante Adams be out as he recovers from turf toe? Find out the latest on Adams' injury and his potential recovery timeline.