Getty Wayne Gallman is likely to be a top waiver wire add.

The first few weeks of the NFL season has kept the fantasy football waiver wire busy with the number of injuries that are continuing to add up. The previous two weeks were defined by quarterbacks getting sidelined, but Week 3 featured injuries to a few key skill position players. Saquon Barkley, T.Y. Hilton and Julian Edelman all sustained injuries that could cause them to miss time.

Wayne Gallman and Darrel Williams become must adds based on the scarcity at running back. Those targeting Gallman thinking he will produce like Barkley are likely to be disappointed. Even with a suspect offensive line, Gallman is still worth an add based on the opportunity he will likely receive in Barkley’s absence.

It is hard to imagine having a great deal of comfort starting Gallman even though the opportunity appears to be there. My initial preference was to go with Williams’ upside if I had to decide between the two backs. With the recent news that Barkley could miss as much as eight weeks, Gallman reclaimed the top spot just based on his potential workload.

Williams played well in Damien Williams’ absence, but the challenge is what his workload will be in a crowded Chiefs backfield. Williams arguably outperformed LeSean McCoy from a fantasy perspective, but his value is directly dependent on the other Williams’ health. Williams did receive the start over McCoy showing that the Chiefs coaching staff think positively about his abilities.

As for wide receivers, there are a few available targets that are not widely owned. Dolphins rookie wideout Preston Williams has consistently performed each week, especially in PPR leagues.

Golden Tate is worth a stash as he will be eligible to play in Week 5 after serving his four-game suspension. Colts receiver Zach Pascal is worth a speculative add given the uncertainty surrounding Hilton’s health. Phillip Dorsett is once again fantasy relevant after the Patriots released Antonio Brown. Dorsett had monster performances both weeks when New England was without Brown which is now the permanent reality for the Patriots.

Gardner Minshew & Jacoby Brissett Are Both Putting Up Good Numbers

If you are still recovering from the quarterbacks that are sidelined, Gardner Minshew and Jacoby Brissett have both put up good numbers in every game they have played this season. They may not have the name recognition of some of the other NFL signal-callers, but the production can keep you in your weekly matchup.

If you can only choose one, I like the upside Minshew offers with his rushing attempts. Daniel Jones has a smaller sample size but had one of the best fantasy performances of any quarterback in Week 3. Jones is also worth a pickup for a quarterback-needy team. As always, feel free to follow me on Twitter @JonDAdams and send me your waiver wire or general fantasy football questions.

We will continue to update my waiver wire rankings as more games are completed. Here is a look at my top waiver wire adds heading into Week 4. 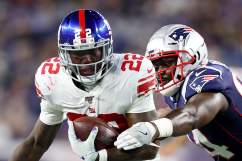