Getty There are some similarities between the Ravens offense with Lamar Jackson and what the 49ers ran with Colin Kaepernick.

Seahawks head coach Pete Carroll has some familiarity with Ravens’ offensive coordinator Greg Roman from his days in the NFC West with the Niners. During his Week 7 press conference, Carroll was asked if there are similarities to what the Ravens are running with Lamar Jackson to Roman’s 49ers system with Colin Kaepernick. The Seahawks coach confirmed the systems mirror each other a bit and praised Jackson’s command of the offense.

“Yeah, he’s [Lamar Jackson] doing everything,” Carroll noted at his weekly press conference. “I mean, he is doing everything you can think of and they run every play. They got every scheme. They’ve got every pass action. He can throw the ball all over the field. He’s down the field and he’s got quick-game accuracy, on the move stuff. He can do everything. It is a remarkable offense they are putting together right now, and it is very challenging.”

After Roman was promoted to Baltimore’s offensive coordinator, ESPN’s Jamison Hensley noted that the coach was implementing many of the tools he used with Kaepernick in San Francisco.

He incorporated a lot of what made Kaepernick successful in college — from pistol formations to designed runs — to get him comfortable at the pro level. In watching how the Ravens used Jackson in the second half of this season, it looked strikingly like Kaepernick with the 49ers when he was playing at his best. But, with Kaepernick, his passer rating and average yards per pass attempt decreased in each of his three seasons with Roman.

Jackson is a problem for opposing defenses as the Seahawks will witness first hand in Week 7. The Ravens quarterback has long been known for his rushing ability, but Jackson has improved his passing numbers. Jackson is completing 65 percent of his passes this season, nearly a seven percentage point jump from 58.2 percent in 2018.

If Jackson is able to keep up this completion percentage, it would top Kaepernick’s best season in 2012 when he notched 62.4 percent with the Niners. The Ravens are still utilizing Jackson’s dual-threat capabilities despite his claim earlier this season that he “hates” to run with the ball.

Earlier this season, Jackson noted that he preferred to pass the ball from the pocket and hated to run. That said, the Ravens are still utilizing his legs this season as the Ravens quarterback rushed for 152 rushing yards against the Bengals. Jackson told NBC Sports’ Peter King that “90 percent” of these plays happened on designed runs.

“We’re just going to do what the defense gives us,” Jackson told me post-game. “The game’s so fast. I’ve got a sharp mind. I really don’t care if I’m running or passing. Just win games.”

“So what percent of your runs today were designed runs, and what percent did you take off because of pressure?” I asked.

“Ninety percent were designed,” he said. “Ten percent I took off on my own.” 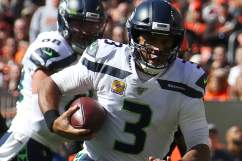