Getty The Seahawks would love to trade for a tight end like Austin Hooper.

The Seattle Seahawks made it clear they wanted to be active at the NFL trade deadline, but did not find the deal they were looking for. Pete Carroll appeared to be pleading with teams to make a deal during his Week 9 press conference on the eve of the deadline.

“I don’t think [the NFL trade deadline is] going to entertain me as much as I would like,” Carroll said, per The Seattle Times. “It seems kind of quiet. As much as we work to get to this point to understand what’s available and what’s going on — like we say, we’re always in on it. But I’m hoping things start to pick up a little bit. Just for fun.”

The three position groups that made the most sense for the Seahawks to target were tight end, offensive line and defensive line. Seattle received bad news in two of the last three weeks with Will Dissly and Justin Britt both being ruled out for the season.

The Seattle Times’ Adam Jude suggested that the Seahawks target Falcons tight end Austin Hooper, but the challenge is there was little evidence to prove Atlanta looked to deal him. One thing that could have swayed the Falcons is that Hooper is in the final year of a team-friendly contract. The Falcons already have one of the most expensive payrolls in the NFL, and there was a chance they would want to get something in return for the young tight end given there is no guarantee they will retain him this offseason.

The Seahawks did not make it a secret that they were looking for help at tight end. Given Russell Wilson’s MVP caliber season, finding another weapon for him to have at his disposal would not have been a bad thing. However, the Seahawks opted not to make a trade but will receive a boost at the position with Ed Dickson expected to return this week.

NFL Network’s Ian Rapoport reported earlier this month that the Seahawks were looking to make a deal for a tight end.

“Note on the trade deadline: The #Seahawks figure to be in the TE market with Will Dissly going down, and here’s how badly they need one: They used some of their back-end DEs (including 6-4, 295-pound Branden Jackson) as blocking TEs in practice and could do so in the game today,” Rapoport tweeted.

Seahawks Running Back Rashaad Penny Was Mentioned in Trade Rumors

It was odd timing for Rashaad Penny to receive an uptick in snaps during Week 8 just two days before the deadline. Rapoport reported that the Seahawks received inquiries about Penny from other teams, but Seattle only wanted to make a deal if they received something substantial in return.

The Seahawks have received calls from RB-needy teams and a potential deal for former first-round running back Rashaad Penny is possible, per colleague Mike Garafolo. With Chris Carson not relinquishing the top job, Penny may have the most value as a trade name. But obviously, they won’t give Penny away for…a penny on the dollar.

According to the Seattle Times, the Lions were among the teams rumored to be interested in the young running back, but it looks like Seattle did not get an enticing offer. The Seahawks clearly wanted to be buyers at the deadline but did not find a partner with the right available players. If the team makes an addition to their roster, it will have to be from the waiver wire or by signing a player who is no longer with a team. 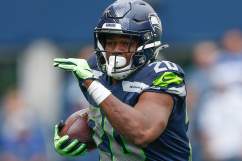