Baker Mayfield’s wife, Emily Mayfield (formerly Wilkinson), is ready for Thursday Night Football between the Browns and Steelers. On the eve of the big matchup, Emily posted a photo of her husband wearing his Browns’ practice gear.

It has been an interesting week for Emily who called out “fair-weather” fans after Cleveland’s big win over the Bills. Baker’s wife took a small shot at some fans during one of her Instagram Stories.

“Fair weather fans are HILARIOUS to me. Get out of here lollllll,” Emily noted on Instagram.

Baker & Emily Got Married During the Offseason

The couple had a great offseason and got married at Calamigos Ranch in Malibu, California, per Brides.com. Emily emphasized that the couple really wanted an outdoor wedding.

“I’m from Nebraska and Baker is from Texas, so we both really love the outdoors,” Emily told Brides.com. “Calamigos was the only venue we looked at because it reminded us of home. It was so romantic, and didn’t feel stuffy or over-the-top.”

Baker and Emily met through mutual friends, but it took some persuading by the Browns quarterback for her to finally agree to go on a date. They unofficially met when Baker was FaceTiming with his brother after an Oklahoma game.

“Baker’s brother was scanning the crowd with his camera to show Baker who had gotten together to watch him play, and I was the one person in the crowd who he didn’t recognize,” Emily explained to Brides.com. “He put two and two together and realized I was the girl our friend had been trying to set him up with all that time!”

Baker Followed & Unfollowed Emily on Social Media to Get Her Attention

First Derby was a success.

Every couple has some version of a story on how they met. Baker’s romance involved following and unfollowing Emily on social media to try to get her attention. ESPN detailed Baker’s social media activity as he tried to woo Emily.

She says she was wary of dating a “punk football player” and ignored Mayfield’s advances for months: He repeatedly followed and unfollowed her on Instagram, trying to attract her attention. Finally, in late December, they exchanged messages. He begged her to meet him before the Rose Bowl, his final college football game. She reluctantly agreed to grab lunch.

The Couple Appeared in a Progressive Commercial

Progressive Insurance recently released a series of commercials featuring the couple. The premise is that Baker is treating First Energy Stadium as his home which means the quarterback is in charge of maintaining the field. During one of the commercials, Emily asks Baker for a drink but the quarterback has to run all the way back to the concession stand to get her a straw.

“I live with the guy, now I have to work with him? Just kidding… Love you babe!#ProgressivePartner #AtHomeWithBaker,” Emily joked on Instagram. 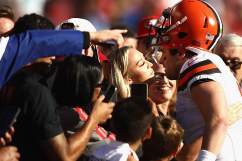