The Cleveland Browns were winners for the first time in five tries on Sunday, breaking a four-game losing streak with a thrilling 19-16 victory over the Buffalo Bills at FirstEnergy Stadium.

When Baker Mayfield hit Rashard Higgins late for the eventual game-winning score and Bills kicker Steven Hauschka pushed a 53-yard tying field goal wide, Browns fans had something to cheer about for the first time in over a month as the team moved to 3-6, keeping their slim playoff hopes alive.

Browns fans are loyal to a fault, enduring misery since returning to the NFL in 1999. The team has just two winning seasons since then — including the 0-16 campaign of 2017 — and has made the playoffs just once.

But with the Browns entering the season with unrealistic hype thanks to a roster that looked to be among the most talented in the NFL, many newcomers latched on to Cleveland as their squad this season. However, once the Browns bandwagon hit some big speed bumps, some fans were quick to leave to Dawg Pound behind, instead opting to bash the long-struggling franchise.

Mayfield has been premier among the Browns players who have struggled this season, although he has bounced back since the bye week.

He’s passed for 2,201 yards, 9 touchdowns and 12 interceptions this season, but is coming off of his best game of the year against the Bills. He passed for 238 yards and 2 touchdowns, notching a season-best QB rating of 102.7.

Not mind-blowing numbers, but evidence he is starting to turn the corner against good defenses.

The expectations were especially high for Mayfield considering how he performed during his first year in the league, setting the rookie touchdown record (27) in just 13 starts. So the critics came down especially hard on him, questioning if the former No. 1 overall pick was indeed the savior at the quarterback position the Browns most desperately needed.

Baker’s wife, Emily Mayfield, heard the noise and shot back at some of those looking to get back on his good side after the victory.

“Fair weather fans are HILARIOUS to me,” Emily Mayfield wrote. “Get out of here lollllll.” 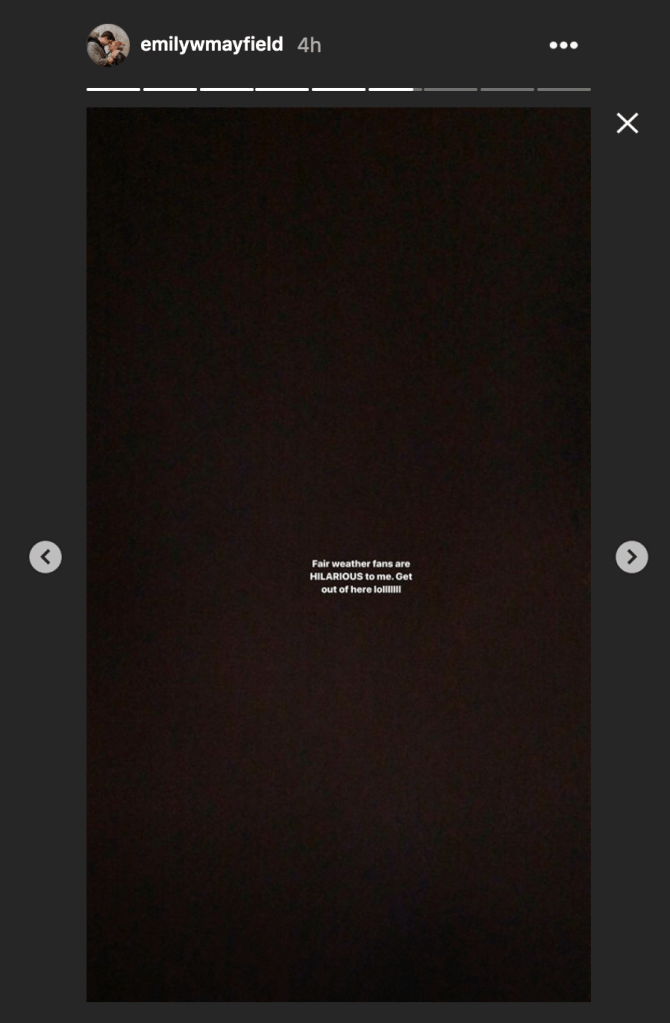 Emily Mayfield is currently part of local Cleveland station WKYC as a special correspondent. Here’s what the station had to say of her involvement:

“We are thrilled to welcome Emily to the 3News family,” said Micki Byrnes, WKYC Studios president and general manager in a news release. “Emily’s passion for Northeast Ohio, genuine curiosity and her gift of connecting with people in the community will come to life in her stories for WKYC Studios. Her viewers will get a glimpse of Northeast Ohio through her eyes – discovering all that our region has to offer. From exciting innovation, to shining a light on the people & places that drive Cleveland’s health, wellness and lifestyle sectors.”

Emily and Baker got married in the offseason, just before the start of the season.

Baker Mayfield Praised for Taking Care of the Ball

After his bounce-back performance against the Bills, head coach Freddie Kitchens praised his quarterback while speaking to the media on Monday.

The Browns have a short week to prepare for AFC North rival Pittsburgh. The team’s face off on Thursday, with Cleveland installed as a 2.5-point favorite.