USWNT star Carli Lloyd went on The Rich Eisen Show Wednesday to discuss a number of things, and her foray kicking field goals for NFL teams this past summer came up.

The women’s soccer star said she was invited by two NFL teams to kick in the fourth preseason game this year, but said she couldn’t commit to either of the teams due to scheduling conflicts. “It was pretty close,” Lloyd said when asked if she almost signed with an NFL team this year. Lloyd would not reveal which two NFL teams extended invitations to her, but if any team remains or becomes interested in 2020, Lloyd could be ready.

“It was non stop for several weeks,” Lloyd said of the attention she received after booting several field goals while visiting the Philadelphia Eagles this summer. If either of the previously interested teams still hasn’t found a kicker by next season, Lloyd confirmed that she would be interested in switching from women’s soccer to men’s football–and that she would be much more available–after she finishes competing in the 2020 World Cup next year. 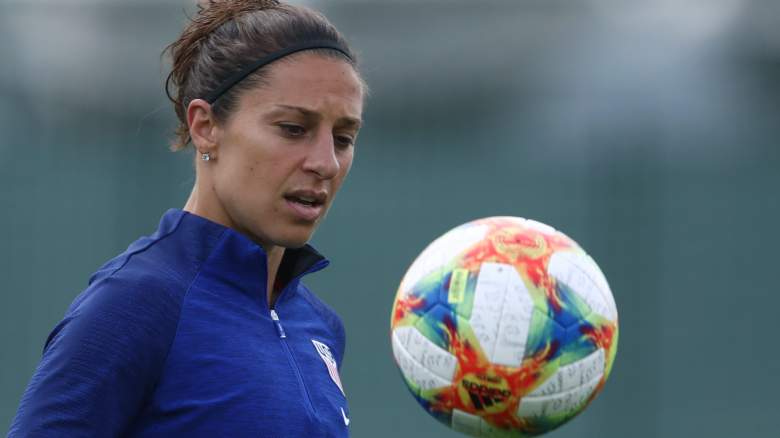 GettyCarli Lloyd of the USWNT would ‘absolutely’ try to become a professional football player in 2020.

When Eisen asked if she would entertain the idea of becoming the first female player in the NFL after the Olympics and all of her USWNT obligations are fulfilled next year, Lloyd didn’t hesitate: “Yeah, absolutely…This isn’t just a publicity stunt or…something that I’m having fun, just kind of stringing the media along,” she said.

“I know that I can do it…I know that I have the mental capacity in pressure situations…I know that there would be loads of people that would want to see me fail, that’s no different than the entirety of my career,” Lloyd noted, saying she has been dealing with naysayers her entire life.

She also said she’s not going to take playing in the NFL lightly by any means. She acknowledged her size difference, but also noted her own work ethic: “I want to be good at it,” Lloyd said, also suggesting that she wouldn’t pursue being a kicker in the league if she couldn’t perform at an extremely high level.

She also acknowledged what her becoming the first female to play in the NFL could possibly mean to others: “If I can help kind of pioneer and help break down some doors for other women in the future, that would be amazing,” Lloyd said.

A few teams that were floated around as possible landing spots for Lloyd before the season began were the Minnesota Vikings and the Chicago Bears. The Bears in particular are coming off a game in which their kicker, Eddy Pineiro, just missed two huge field goals, and they may be in the hunt yet again next year.