Getty Baker Mayfield and the Browns take on the Steelers on Thursday Night Football.

The Pittsburgh Steelers take on the Cleveland Browns on Thursday Night Football featuring plenty of players that fans will have in their fantasy lineups. My Start-Sit predictions will walk you through all the difficult fantasy lineup decisions for tonight’s game. Be sure to also check out our full fantasy predictions for the entire Week 11 slate of games.

The Browns offense has not lived up to preseason expectations, but there are still a few more weeks left for us to see an uptick in production. Nick Chubb has been, by far, the most consistent fantasy option in Cleveland and that is expected to continue in Week 11. Kareem Hunt is also back in the mix after serving his suspension to start the season.

Both defenses have performed well against the pass which could limit fantasy opportunities. The Browns rank seventh in fewest passing yards allowed at 221 per game, while the Steelers are 12th at 226.9 yards per contest. Cleveland has allowed a lot of yards on the ground at just under 135 per game, which ranks as the sixth-most in the NFL. The Steelers sit in the middle of the pack at 16th with 105 yards per game.

This game features two receivers that have been major fantasy disappointments this season. Odell Beckham Jr. and JuJu Smith-Schuster have both underperformed based on where they were drafted. We will see if either player can turn it around for the fantasy playoffs. Feel free to reach out on Twitter @JonDAdams with any fantasy football questions you may have heading into Week 11.

Here is a look at my fantasy football predictions for the Browns-Steelers matchup.

GettyNick Chubb is poised for another strong fantasy week.

Chubb may not be getting the amount of work that some fantasy owners would like, but the Browns running back is still a must-start. Likewise, James Conner goes back to being in your lineup assuming there is not a setback with his injury before kickoff. Conner’s return means that Jaylen Samuels goes back to be nothing more than a lottery-ticket play. It is difficult to start him with confidence given his workload is not guaranteed with Conner back to full health.

Kareem Hunt has muddied the waters a bit in Cleveland, but he appears to be taking touches away more from the other backs on the team rather than Chubb. Hunt can be started as a flex play in PPR leagues with RB2 upside thanks to his involvement in the passing game.

Jarvis Landry Is a Start, While JuJu Smith-Schuster & Odell Beckham Jr. Are Hard to Trust

Jarvis Landry has clearly been the No. 1 receiver in Cleveland this season and can be started with confidence. Beckham is still getting targets but has not been able to find the endzone enough to warrant where he was drafted. Most teams likely are starting Beckham by necessity, but he is no longer a must-start for owners fortunate to have depth at receiver.

Smith-Schuster is in a similar position but has been even less productive. The Steelers top receiver’s upside is now merely a WR3 and is better served remaining on your bench until Mason Rudolph starts looking his way more. Pittsburgh’s offense has been influx since Ben Roethlisberger’s injury.

We are starting to see Rudolph’s chemistry with James Washington emerge which we expected when he was named the starting quarterback given their history together at Oklahoma State. Washington is a WR3 this week given the number of targets he is receiving.

Baker Mayfield Has Top-12 QB Potential Against the Steelers

GettyBrowns QB Baker Mayfield is hoping to turn the corner.

We are starting to see improvement from Mayfield, and the one thing keeping him from having great fantasy outings is the Browns’ struggles in the red zone. Once the Browns are able to capitalize on their opportunities to score, we are likely to see Mayfield hover around top-12 quarterback territory.

It is not a great matchup against the Steelers, but I think Mayfield has solid potential at home to make him a worthwhile play. There are likely going to be a number of better quarterbacks in Week 11, but if you are in a bind Mayfield can be started.

Rudolph has not proved to be fantasy relevant with the exception of two-quarterback leagues. The Steelers quarterback is once again not a strong play in Week 11.

Vance McDonald Is a Sit at Tight End in Week 11

GettyPittsburgh Steelers TE Vance McDonald has struggled to be a consistent fantasy producer in 2019.

Prior to the season, there was some optimism that Vance McDonald could have a major role with some of the key Steelers offensive players departing. It has not worked out that way, and McDonald should not be started in Week 11. Like many tight ends, McDonald’s fantasy relevance is touchdown-dependent.

There is not a tight end playing tonight that you want to start. Demetrius Harris has been filling in for the Browns but has not produced enough to find his way into your lineup. The good news is David Njoku could return from a wrist injury as soon as Week 12. 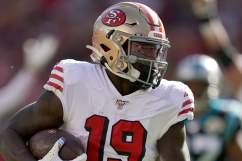