Getty Matthew Stafford could miss the rest of the 2019 NFL season with a back injury.

Matthew Stafford’s back injury could cause the Lions quarterback to miss the rest of the season. Stafford is dealing with fractured bones in his back and the team opted to rest the quarterback until he gets healthy.

ESPN reported that the Lions are considering keeping Stafford out for the rest of the season, but the quarterback has been described as “maniacal” about playing again in 2019. Stafford’s injury was given a six-week return timeline, per ESPN. Stafford has not played since November 3rd and has been sidelined a little more than three weeks heading into the Lions’ Thanksgiving matchups with the Bears.

It sounds like Stafford would be playing if it was just up to the quarterback, but the Lions opted to rest him until he can get fully healthy. Unless the Lions can go on a winning streak, there is little incentive for Stafford to return with the postseason a distant possibility. The Lions are aware that most players would be out an extended period of time with Stafford’s injury as ESPN’s Adam Schefter detailed.

But Detroit also knows that this type of injury would sideline most players six weeks, if not longer. It is another testament to Stafford’s toughness; he had started 136 straight games before last week’s absence, the sixth-longest streak for a quarterback in NFL history.

Stafford Had Started 136 Consecutive Games for the Lions

Prior to the injury, Stafford started in 136 consecutive games for the Lions, which is the sixth-longest streak for an NFL quarterback. Schefter initially reported that the Lions doctors would not allow him to play when he wanted to take the field in Week 10.

“Lions’ QB Matthew Stafford is being told by some not to play Sunday in Chicago because of a back injury that has left him questionable, but he is hoping to try to play through the pain, per sources. No decision is likely until pregame warmups…Lions’ QB Matthew Stafford has fractured bones in his back and doctors will not let him play today vs. Bears, per source. Jeff Driskell starts for Detroit,” Schefter tweeted prior to Stafford missing his first game this season.

Stafford’s Wife, Kelly, Thanked the Lions Medical Staff for Keeping Him Off the Field

#Lions QB Matthew Stafford’s wife Kelly weighs in on Instagram, thanking the team docs and glad he has a chance to heal. pic.twitter.com/LP3A1sE1WF

Stafford may want to be on the field, but his wife Kelly Stafford took to Instagram after the news broke. She posted a heartfelt message, in part, thanking the Lions’ medical staff for letting him take time to heal, per NFL Network’s Ian Rapoport.

“I don’t think there is anything this man hates more than to not be out there battling with his guys,” Kelly Stafford noted on Instagram. “These men work so hard all year long..it’s tough to sideline them. So I’m grateful for our team docs. He has battled through so much, so much more than anyone knows. I’m incredibly proud to be his wife, he’s the toughest SOB…but I’m happy his body will get a little healing time.” 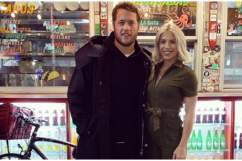 Read More
Detroit Lions, Football, Matthew Stafford, NFL
What happened to Matthew Stafford? Find out the latest injury updates on Stafford's back and when he is expected to return to play for the Lions.