Getty The Vikings edged out the Cowboys in Week 10.

It was a crazy Week 10 in the NFL causing a lot of upheaval in the latest edition of our power rankings. If you somehow parlayed the Dolphins and Falcons to pull off crazy upsets, you received a good return on your Vegas investment.

This week will be defined by what many of the top teams did not do more than any signature win. The most surprising result came in New Orleans where the Saints not only lost to the Falcons by double digits but the prolific offense failed to score a touchdown in the game.

Keep in mind, the Falcons are giving up the third-most points in the NFL at 31.3 per game. To put it in perspective, the last time a 1-7 or worse team defeated a team that was at least 7-1 was when the Chargers defeated the Broncos in 1986, per ESPN. Dan Quinn continues to resemble a zombie fighting off the death of his coaching tenure in Atlanta and may have bought himself even more time amidst rumors that he is on the hot seat. Quinn already managed to survive the Falcons’ bye week with his job intact.

The Colts struggled without Jacoby Brissett and the once-tanking Dolphins now find themselves on a winning streak. Meanwhile, the Titans spoiled Patrick Mahomes’ return to the Chiefs as Tennessee continues to be one of the most puzzling teams to predict from week to week.

Top 5: All Eyes Are on the Seahawks-49ers Monday Night Football Matchup

It was an odd week for the teams at the top of the power rankings. The Patriots were on a bye after suffering their first loss of the season. New Orleans and Kansas City both suffered upsets. None was as surprising as the Saints losing to a Falcons team that previously had one win this season.

The Falcons defense did not allow a touchdown to the Saints at the Superdome and notched six sacks in the game, which is one less than their season total. The only thing that looked normal was Lamar Jackson running all over the Bengals as the Ravens continued their hot streak.

It looked like the Chiefs would hang onto a victory against the Titans, but a late drive by Tennessee gave them the win in Mahomes’ return. The marquee matchup of Week 10 features the top-ranked 49ers against the Seahawks is the very last game.

The Seahawks-Niners matchup not only has major division implications but will impact the entire NFC race. Both teams are almost certain to make the postseason, but a 49ers loss would open up the door for the No. 1 seed and the NFC West. We have sung the praises of the 49ers, but it is true that San Francisco’s schedule has been among the easiest slates for the top NFL teams.

Bottom 5: The Dolphins Are on a Winning Streak

The Bengals are the worst team in the NFL.

At the beginning of the season, we thought the bottom spot would be the Dolphins’ to lose. The Bengals have firmly taken over No. 32 with little reason for optimism. Cincinnati fans thought there was good news ahead as A.J. Green was on the verge of making his 2019 debut, but the star receiver sustained a setback just days before gameday.

The NFL draft cannot get here soon enough for Bengals fans. Cincinnati has major questions to address this off-season including finding a long-term solution at quarterback and making a decision on Green who is on the final few weeks of his current contract.

Two key matchups stand out above the rest as we look ahead to Week 11. The Texans square off with the Ravens in what should be must-see TV as Deshaun Watson tries to outduel Lamar Jackson. We also get a rematch of Super Bowl LII as the Eagles host the Patriots. New England is looking to avoid a losing streak, while Philadelphia tries to keep their postseason hopes alive.

Here is a look at our updated NFL power rankings after Week 10. We will continue to update this table as more games are completed. 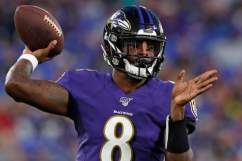