Getty LSU is headed to the College Football Playoff.

The race for the final College Football Playoff rankings ended up being a bit anti-climatic. Oregon’s upset of Utah combined with Georgia’s blowout loss to LSU meant that Oklahoma’s Big 12 title win sent them to the playoff.

There is a little suspense over the order of the rankings as LSU made a strong case for the No. 1 seed with their dominant win over Georgia to win the SEC Championship. LSU now has wins over Alabama, Georgia, Texas, Texas A&M, Florida and Auburn. LSU’s defense had been the team’s one question mark, but the Tigers dominated Georgia’s offense with the only touchdown allowed being a garbage time TD.

Meanwhile, Ohio State struggled against Wisconsin in the Big Ten title game, while Clemson dominated Virginia in the ACC title game. It is difficult to compare undefeated teams because each would hold the No. 1 seed in most seasons, but several teams achieved perfection in 2019.

We are expecting LSU, Ohio State, Clemson and Oklahoma to make the College Football Playoff. The big question is the seeding and matchups for the Peach and Fiesta Bowls.

Peach Bowl Prediction: No. 1 LSU vs. No. 4 Oklahoma

The committee tries to place the top seed in a location that will not put them at a disadvantage. LSU is the new favorite to land the No. 1 seed which means the Peach Bowl in Atlanta makes the most sense. The Tigers just played in Mercedes-Benz Stadium, and the LSU faithful will have no trouble traveling east to Atlanta once again.

Oklahoma is expected to be the No. 4 seed giving us Joe Burrow and Jalen Hurts in an epic quarterback matchup. The game features two explosive offenses, while both defensive units have improved since the beginning of the season.

Fiesta Bowl Prediction: No. 2 Ohio State vs. No. 3 Clemson

Clemson put on a show in the ACC title game, but it will be hard for them to move up given the strength of the conference this season. Clemson taking on Ohio State feels more like a championship matchup than a semifinal game. Trevor Lawrence and Justin Fields are the early favorites to be competing for the No. 1 pick in the 2021 NFL draft. The two have been linked together since their recruiting days heading into college.

Buckeyes fans are hoping a few weeks off can help Fields get healthy. The Ohio State quarterback did not look quite like himself against Wisconsin in the Big Ten title game.

Here is a look at our predictions for the College Football Playoff rankings. 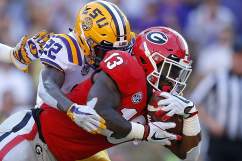