Getty LSU takes on Oklahoma in the College Football Playoff.

There are no NFL games on TV today, Saturday, December 28th, but there is plenty of college football action that can serve as a suitable replacement. All the NFL Week 17 games will be on Sunday, December 29th as the playoff matchups are determined.

The two College Football Playoff semifinals games take place tonight. No. 1 LSU squares off with No. 4 Oklahoma in the Peach Bowl at 4 p.m. Eastern on ESPN. The primetime matchup features No. 2 Ohio State taking on No. 3 Clemson in the Fiesta Bowl. The winners will battle for the national championship in New Orleans on Monday, January 13 at 8 p.m. Eastern.

LSU is a nearly two-touchdown favorite over Oklahoma in the Peach Bowl. LSU quarterback Joe Burrow does not believe his team is looking past the Sooners.

The 49ers-Seahawks Headlines the Week 17 Matchups

There are several key NFL Week 17 matchups with playoff seeding on the line. The Seahawks host the 49ers with the winner locking up the NFC West title. The Niners can get the No. 1 seed in the NFC with a victory, while the Seahawks would need some help to get a first-round bye even with a victory. The game also marks the return of Marshawn Lynch to Seattle as the team signed him after Chris Carson was ruled out for the season.

Lynch has not played a snap since 2018, but the Seahawks believe the running back can help the team during their playoff run. Seahawks head coach Pete Carroll noted that Lynch wants to prove he has a little left in the tank.

“He is highly motivated to do everything he can do in this game, he really is,” Carroll said, per Seahawks.com. “He wants to do everything he could possibly do, and he wasn’t done. He got in the situation where he was injured and had a rehab and all that, and it just didn’t fit together right away, but he’s not done playing, he wants to go, so this is his entree, and he’s going to go for it. He won’t hold back, he won’t hold back one bit. I’m looking forward to see what happens.”

The Cowboys and Eagles are fighting for the final NFC playoff spot. Over in the AFC, the Titans, Steelers and Raiders all have a chance to be the final Wild Card team.

Here is a look at today’s college football schedule as well as the NFL Week 17 schedule.

The following games are all on Sunday, December 29th. 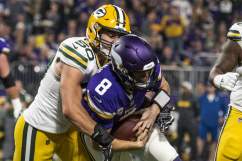