Getty Patrick Mahomes and the Chiefs edged out Tom Brady and the Patriots in their Week 14 matchups.

It was a big week for teams at the top of our power rankings with several matchups featuring potential playoff teams. Week 14 was a time when teams either gained exposure or were exposed with a few upsets over the weekend.

The 49ers and Saints gave us an instant classic and what was likely the best game we have seen this season. After a back-and-forth contest, it appeared as though the Saints would finally hold onto the win, but the Niners were able to mount a late drive to steal a victory in New Orleans. After the win, 49ers head coach Kyle Shanahan noted the team practices keeping their emotions in check during critical moments.

“I tell myself all the time, you just want to make sure that your nerves don’t get to you,” Shanahan told The Athletic. “And if they are getting to you, you better check yourself and be able to recognize when nerves are getting to you so you don’t do something based off of nerves. You do something off your preparation and everything.

Top 5: The Chiefs Continue to Rise

Kansas City shocked New England in Foxborough ending a home winning streak that spanned multiple seasons. After trailing by double-digits for most of the game, the Patriots managed to make it a one-possession game, but the Chiefs were able to make a red-zone stand to hang onto the victory. The Patriots’ loss creates a very interesting race in the AFC.

The Patriots have now lost three of their last five games, and the big question is how we frame this team moving forward. Many of us are fearful to dismiss the Patriots as they have proven over and over again that they are never quite as dead as we may think. See the 2018 season for proof that New England’s season is far from done. That said, just because the Patriots have recovered in the past does not mean they will do so this season.

There are a lot of good teams in the NFL, and the Patriots have significant holes to fix before the postseason if they hope to make a run at another Super Bowl. The Patriots roster looks vulnerable with little options to improve this time of year.

Baltimore continued their hot streak by going on the road and beating the Bills. The Ravens survived a late comeback by the Bills as Baltimore was in control for most of the game. The Patriots’ loss means the Ravens are even in more control of the No. 1 seed in the AFC.

Seattle had an opportunity to clinch a playoff spot and move into the No. 1 seed in the NFC. Instead, the Seahawks offense sputtered while the Rams were able to gash Seattle’s defense with big plays.

The Seahawks can still win the NFC West, but Seattle now has blowout losses to the Ravens, Rams and Saints this season. When things are right, the Seahawks can play with anyone, but on Sunday Night Football the team looked as pedestrian as we have seen from them all season.

Bottom 5: The Fight for Joe Burrow

The biggest thing that happened at the bottom of the standings took place on Saturday in a college football conference championship. LSU quarterback Joe Burrow continued to prove just how valuable the No. 1 pick is for a team that needs a QB. Bengals fans are having no trouble imagining the LSU quarterback in a Bengals uniform but there is still time for another team to land the selection.

Miami continues to show they have plenty of fight even though they have zero chance of making the postseason. The tanking talk from the beginning of the season seems like a long time ago as the Dolphins have likely played their way out of landing the No. 1 pick.

Elsewhere, the Falcons continued to prove it is anyone’s best guess on what team shows up on a weekly basis. It will be interesting to see if Dan Quinn has done enough to save his job, but all signs point to his time in Atlanta only lasting a few more weeks.

The Cowboys are not quite in our Bottom Five, but they are closer to that than the top. The week started off with the Bears thoroughly embarrassing the Cowboys on Thursday Night Football. The only thing more embarrassing than the Cowboys’ performance is the entire NFC East which somehow may end up hosting a playoff game with a losing record thanks to NFL rules that give home-field advantage to division winners.

Here is a look at our latest NFL power rankings. We will update the table below after Monday Night Football. 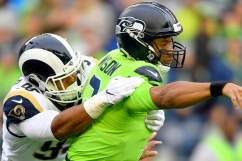