Seattle Seahawks quarterback Russell Wilson has at least one supporter for the NFL MVP award. Fox Sports’ Colin Cowherd argued that Wilson deserves the award more than Ravens quarterback Lamar Jackson. During his daily Fox Sports show The Herd, Cowherd cited the Ravens having 12 Pro Bowl selections compared to the Seahawks’ two players as evidence of how much Wilson means to the Seahawks.

“Don’t @ me, Russell Wilson is my MVP. Seattle is the number one seed in the NFC and I have no idea how,” Cowherd said, per Fox Sports. “Pro Football Focus said they have the 31st best passing offense — in a passing league! Their defense is 29th against the pass, 29th in sacks, 27th in total defense, and 21st in scoring defense. Their wide receivers? Don’t get my started. And yet they’re the number one seed in the tougher NFC, and for one reason – Russell Wilson. Lamar Jackson is fun, go for vote for him, but he’s got help everywhere — tight ends, offensive line, defense, special teams, corners – Russell has help nowhere.”

Cowherd’s point about Wilson not having any help is a bit exaggerated. Chris Carson has been one of the best running backs in the NFL, and D.K. Metcalf is arguably the most consistent rookie offensive player this season.

Tyler Lockett has stepped up as the Seahawks top receiver after Doug Baldwin retired over the offseason. While the Seahawks defense has had its struggles, Jadeveon Clowney has been a force on the defensive line and Bobby Wagner continues to be the anchor in the middle of the field.

Here is a look at Cowherd’s full comments on the MVP race.
Colin Cowherd on why Russell Wilson should be MVP, OBJ's trade requests | NFL | THE HERDColin Cowherd makes a case for Russell Wilson winning NFL MVP over Lamar Jackson and weighs in on the rumors that Odell Beckham Jr. wants out of Cleveland. #TheHerd #NFL #RussellWilson #LamarJackson #OdellBeckhamJr #Seahawks #Ravens #Browns SUBSCRIBE to get all the latest content from The Herd: foxs.pt/SubscribeTHEHERD ►Watch the latest content from The Herd: foxs.pt/LatestOnTheHerd…2019-12-18T20:41:46.000Z

Cowherd Recently Picked the Seahawks to Make the Super Bowl

Wilson is having the best season of his NFL career and is a big reason why the Seahawks are the No. 1 seed in the NFC with two weeks to go. Wilson has thrown for 3,708 yards, 28 touchdowns and five interceptions through the first 15 weeks of the season. This is not the first time Cowherd has backed the Seahawks as the analyst recently picked Seattle to make the Super Bowl.

“I like Seattle right now as the representative in the Super Bowl from the NFC,” Cowherd explained in early December. “I said it yesterday and I said it last week, their roster is good, it’s not special. But their coach A+, their quarterback A+, their general manager John Schneider made nice moves: Josh Gordon, Quandre Diggs, Jadeveon Clowney. This is a team that kinda had to find their identity. They wanted to play a certain way.”

Lamar Jackson Is the Favorite to Win the NFL MVP Award

Jackson is still the favorite to win the NFL MVP award at -3000, per OddsShark. Wilson is a distant second at +1000 with two weeks to go in the season.

Wilson could have an opportunity to leave a lasting impression in Week 17 as the Seahawks take on the 49ers in a matchup that will likely be for the NFC West. The game is the favorite to be flexed into Sunday Night Football which would give Wilson another primetime opportunity in front of voters. 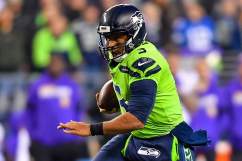