Getty Some are calling Russell Wilson and the Seahawks Super Bowl contenders.

The Seattle Seahawks moved up to the No. 2 seed in the NFC, and one analyst believes they are Super Bowl-bound. Fox Sports’ Colin Cowherd unveiled his latest power rankings and has the Seahawks at No. 2. Cowherd predicted it will be the Seahawks that are headed to Miami to play in the Super Bowl.

“I like Seattle right now as the representative in the Super Bowl from the NFC,” Cowherd explained. “I said it yesterday and I said it last week, their roster is good, it’s not special. But their coach A+, their quarterback A+, their general manager John Schneider made nice moves: Josh Gordon, Quandre Diggs, Jadeveon Clowney. This is a team that kinda had to find their identity. They wanted to play a certain way.”

Cowherd went on to explain why the Seahawks have the makings of a Super Bowl contender. The Fox analyst cited Carroll, Wilson and the team’s ability to create turnovers as a big reason for their success this season.

“Pete Carroll teams are generally very good in December and January,” Cowherd continued. “They lead the NFC in takeaways. It’s not just because of talent. They don’t have the talent of some of those NFC teams like New Orleans, Minnesota on defense. But they lead the NFC in takeaways. They’re first in the two-minute offense. So they got the special sauce at quarterback with Russell Wilson.”

Here is a look at Cowherd’s full comments about the Seahawks and the other top NFL teams.

Seattle Is 5th in the Latest Super Bowl 2020 Odds

The Seahawks are also moving up on Vegas’ list off teams with the best chance to win the Super Bowl. Seattle is now fifth with +800 odds to win Super Bowl 54. The Ravens, Patriots, Saints and 49ers are all ranked above the Seahawks in the 2020 Super Bowl odds, per OddsShark. After the Seahawks road win over the Eagles in Week 12, Carroll noted that there is something special about the team.

“This is the team that I think we’ll look back on, there was this deep seeded, longstanding care for each other that comes about in terms of harmony that they really are together,” Carroll noted, per Seahawks.com. “They’re with us on everything and they’re going along with it. They’re pliable in a sense. They’re growing into the belief that they can win football games.

The Seahawks Are the No. 2 Seed in the NFC

Seattle has had two recent Monday Night Football games and both matchups have been monumental. The Seahawks defeated the 49ers to gain ground in the NFC West then came away with a win over the Vikings to take the lead in the division just a few weeks later.

If the postseason started today, the Seahawks would be the No. 2 seed in the NFC with a first-round bye and would get at least one playoff game at CenturyLink Field.

The Seahawks have four games remaining on their schedule, including two difficult matchups within the division against the Rams and 49ers. Seattle controls their own fate when it comes to winning the NFC West, but it will be a difficult road especially the final game of the season against San Francisco. 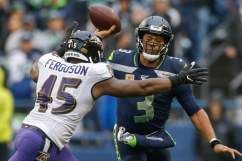