Getty Patrick Mahomes is the frontrunner for Super Bowl MVP.

Superbowl 54 is the second big game since the U.S. Supreme Court overturned the Professional and Amateur Sports Protection Act back in May of 2018. Roughly 26 million Americans are expected to bet on this year’s game, which is about 3 million more people than last year, per a call with the American Gaming Association. That amounts to over 10% of the adult population.

Americans are expected to place $6.8 billion in wagers on the game. This figure does not account for the people who bet with a local bookie (person-to-person) or participate in office pools.

“With 14 operational markets and another seven close behind, Americans have never before had so many opportunities to wager on the Super Bowl in a safe and legal manner, and clearly, they are getting in on the action,” said Bill Miller, president and CEO of the American Gaming Association. “With increased visitation to legal sportsbooks, we are successfully drawing bettors away from the predatory illegal market.”

“I have absolute confidence that Americans didn’t start betting on sports when the Professional and Amateur Sports Protection Act was overturned,” Miller added. “What makes this year’s Super Bowl remarkable is that more fans than ever before will have the reassurance that the integrity of their bets on the big game will be preserved. The continued expansion of legal sports betting—to the detriment of the illegal market—truly benefits all stakeholders, from enhanced fan engagement for teams to added tax revenue for state and local economies.”

NFL Viewership saw a 5% increase, marking the second-straight year that ratings improved, per the WSJ. The league continues to have more interest among American viewers than any other sport.

Per an AGA survey, 75% of NFL bettors say they are more likely to watch a game that they have money on and over $38 million American adults have betting ambitions during the league’s 100th season this past year.

Which States Currently Have Legalizated Betting? 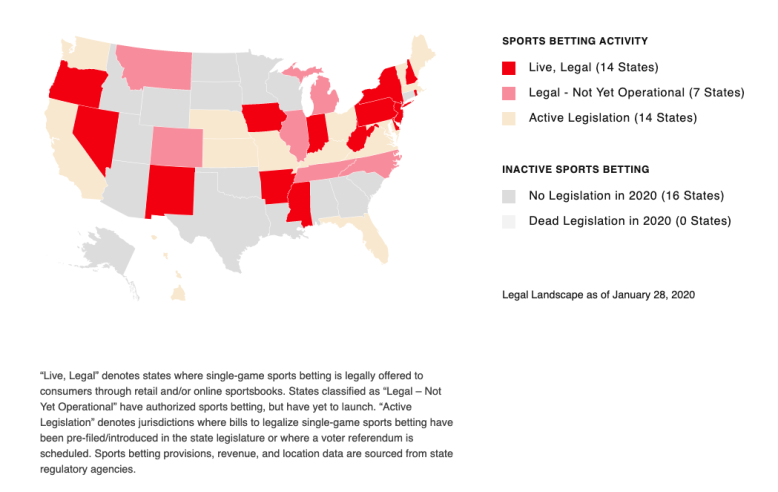 14 states offer legal, regulated sports betting. Another six, plus the District of Columbia, are expected to open shop in the coming months.

Nearly four million American adults plan to place a bet in-person at a sportsbook, which is a 25% increase from last year.

Who Are You Betting On?

Per the AGA’s survey, 52% of people plan on taking the Chiefs on Sunday. The team will face a difficult test against the 49ers’ defense, as our own Jonathan Adams relayed.

The Chiefs are favored by 1.5 points in many books, as of this writing, though it may be a wiser bet to simply take the Moneyline for the team you believe will win. As Evan Abrams of The Action Network points out, just over a third of all Super Bowls (19-of-53) had a spread of 4 of less. On every occasion, the spread never came into play, meaning getting the points didn’t help you and giving up the points didn’t matter as long as your team won.