“Los Angeles will host a public memorial Feb. 24 at Staples Center for Kobe Bryant and eight others killed last month in a helicopter crash per
@latimes,” Jones tweeted.

The city of Los Angeles continues to work with Bryant’s family to put together funeral plans, but it is unclear if the family will also hold a private service in addition to the memorial. L.A. mayor Eric Garcetti noted his office has been working with Bryant’s wife, Vanessa Bryant, to put arrange an upcoming service.

“We don’t have that date finalized, but we’ve been talking every day to the Lakers, and most importantly, to (Bryant’s widow, Vanessa) as well,” Garcetti said, per USA Today.

Bryant’s body has been released to the family and the funeral plans are expected to be finalized in the coming days, per Yahoo. As for a permanent memorial for Bryant, Garcetti admitted the city has received a lot of suggestions.

“I think longer term, people want a monument to this man,” Garcetti explained to ABC 7. “But I always think that’s best seen through the wisdom of a few days or a few weeks, and right now we’re gonna just listen. People have sent the most amazing ideas for tributes and boulevards and this and that.”

Vanessa Bryant recently broke her silence on the tragedy with a lengthy Instagram post. She thanked fans for their support and asked for privacy as the family deals with the loss.

“Thank you for sharing your joy, your grief and your support with us,” Vanessa Bryant noted on Instagram. “We ask that you grant us the respect and privacy we will need to navigate this new reality.”

Garcetti told ABC 7 that the city will help Bryant’s family with whatever is needed to plan the funeral. ABC 7 reported that funeral plans are “still in the works” and the city has lowered the flags to half staff.

“We really want to listen to Vanessa, to the Lakers, and make sure that we have a chance and the right way to mourn together, as people have been doing spontaneously out on the streets in the next day or two,” Garcetti said, per ABC 7. “Laying him to rest will be something which we are here, ready to help support the family however, wherever and whenever.”

Bryant’s affinity for rapper Lil’ Wayne has been well-documented. Wayne released a new album entitled Funeral on January 31st and honored the late Lakers star on his new record. The rapper left 24 seconds of silence at the end of track No. 8 “Bing James” as a way to honor Bryant with the use of both his jersey numbers, per Billboard.com.

The memorial service will be at Staples Center despite there being speculation that it was too small a venue. According to TMZ Sports, there was consideration to hold the public memorial at L.A. Coliseum. As TMZ pointed out, the Staples Center holds roughly 20,000 people while the Coliseum can hold around 80,000.

Our sources tell us … a meeting took place this week to discuss where Kobe’s eventual memorial might go down in the coming weeks or even months. People who were in the room say a few venues were considered — some made more sense than others.

According to the same TMZ report, the Rose Bowl was considered as a potential venue as well, as it holds around 91,000 people, but they state that Pasadena is “too far away.”

Shortly after news broke of Bryant’s death, fans began gathering outside the Staples Center with his Lakers jersey, flowers and photos to honor the legend. Garcetti announced City Hall would be lit up in purple and gold to honor Bryant.

“Lights for a legend. Los Angeles City Hall lit in purple and gold starting at 8:24 p.m. this evening in honor of Kobe Bryant’s storied championship career and in memory of Bryant, his daughter, Gianna, and all who perished in today’s tragedy,” Garcetti tweeted.

Bryant’s death happened on the morning of both the Pro Bowl and Grammy’s. Players and musicians alike honored Bryant during both events. Numerous NBA teams let the shot clock run down at the beginning of games to honor Bryant’s No. 24. Fans in New Orleans celebrated Bryant’s life in NOLA fashion with a second line march complete with a band.

In New Orleans, the second line is a traditional celebration of life, with music and marching, in the aftermath of a death. It is usually done following a funeral, but Kobe fans in New Orleans were inspired. ?? RIP https://t.co/Fk9dGjJpXY

The NBA has postponed the Lakers-Clippers game that was scheduled for Tuesday, January 28. The teams were planning on honoring Bryant, but the Lakers are expected to have a tribute for him during their next home game.

Bryant and his daughter attended Catholic mass just hours before the fateful helicopter crash, per Daily Mail. The Newport Beach church hosted a prayer service on the morning after Bryant’s death. Bishop Timothy Freyer posted a heartfelt message about the fallen star’s commitment to his faith.

Kobe was an icon who inspired us through his words and actions to set our goals, work hard and achieve our dreams. He was a committed Catholic who loved his family and loved his faith. A longtime Orange County resident and parishioner in our Diocese, Kobe would frequently attend Mass and sit in the back of the church so that his presence would not distract people from focusing on Christ’s Presence.

Sheldon T. Banks Funeral Chapel located in Flint, Michigan is giving fans an opportunity to pay their respects to Bryant. Fans can visit the funeral home and leave cards for the family. The items along with a guest book signed by people who visited will be sent to the funeral home that hosts Bryant’s family, per M Live.

Kobe’s death feels like it will have the same pop cultural impact like when Prince or Michael Jackson died. And I believe if MJ were still living, he’d probably speak at Kobe’s funeral like Kobe did for him pic.twitter.com/TxwemQCF2n

Fans are hoping there were will be a public service where people can show their support for one of the most iconic players in NBA history. Bryant was one of several notable celebrities that spoke at Michael Jackson’s funeral in 2009. Jackson’s funeral was at the Staples Center, and it will be worth watching to see if a similar service is organized there given the number of memorable moments Bryant had in the same building. During an ESPN interview conducted in 2016, Bryant discussed a phone call he received from Jackson prior to his death.

“Keep doing what you’re doing,” Jackson told Bryant, per ESPN. “Don’t come back to the pack and be normal for the sake of blending in with others. Don’t dumb it down.”

A tweet from Unique Sports captured what many believe about a potential service honoring Bryant.

(via muckrock and Pickford Market on IG) pic.twitter.com/LEabFE2ZJL

The planning of Bryant’s funeral is a delicate process given his 13-year-old daughter, Gigi, was one of the nine fatalities in the crash. Bryant’s family could opt to do a private service honoring Gigi and her father.

After his retirement, Bryant began mentoring younger players including recently named NBA All-Star Trae Young. The Hawks guard wore Bryant’s No. 8 jersey to start the game on the evening of his death. After the game, Young spoke about one of his last conversations with Bryant.

“One of the last conversations we had, he was just telling me how much he’s seen my game progress and he’s just been happy for me,” Young said, per ESPN. “He said how proud he was of me and how he wants me to continue to be a role model for kids growing up and for Gigi and all the kids looking up to me, to inspire these kids and continue to play my heart out.” 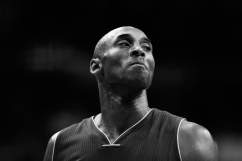 Kobe Bryant Leaned on Catholic Religion Hours Before His Death