In the days after the tragic death of Lakers legend Kobe Bryant, when the date was set for his memorial service—Monday, February 24—the Celtics as an organization responded, altering the team’s travel plans so that players could attend the service.

The Celtics played the Lakers in Los Angeles on Sunday and won’t take the floor again until Tuesday night in Portland, the third game of the team’s four-game Western Conference swing. That allowed team members to remain in L.A. to be present as Bryant was honored.

According to MassLive.com, the Celtics were given 10 tickets to the service—organized through the Lakers—but were given more once the team changed its travel plans.

“I’m really glad I’ll have an opportunity to go to the memorial,” All-Star forward Jayson Tatum said. “It’ll be nice to be there. I’m sure there will be a lot of people there showing their support, and I’m glad I can be one of them.”

Tatum grew up a fan of Bryant and spent time in the offseason working on his game with Bryant. He scored 41 points in the Celtics’ only visit to play the Lakers on Sunday and wore an armband honoring Bryant for the game.

“We had the Kobe wristbands on and first time playing in the Staples Center since the tragedy,” Tatum said after the game on Sunday. “We definitely felt it.”

Among the members of the current Celtics to attend were Tatum, Daniel Theis, Jayson Tatum and Marcus Smart. Theis posted a photo of his ticket to the service on Instagram: 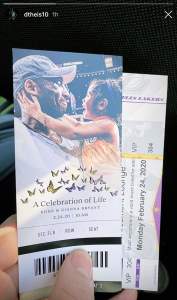 Also in attendance was Celtics icon and Hall of Fame center Bill Russell, an 11-time NBA champion and frequent tormentor of the Lakers—seven of Russell’s championships came at the expense of the Lakers. On Sunday, Russell honored Bryant by wearing a No. 24 jersey and a hat with Bryant’s initials on it.

Russell wrote on Twitter that, “I see everyone tweeting I am wearing @Lakers jersey. I would do anything to honor #KobeAndGianna I am always a @celtics. We had a deeper connection 2+4 does = 6. We had much Love & respect for one another!”

.@STAPLESCenter #Celtics vs Lakers I see everyone tweeting I am wearing @Lakers jersey. I would do anything to honor #KobeAndGianna I am always a @celtics We had a deeper connection 2+4 does = 6. We had much Love & respect for one another! @NBA #MambaForever #MambaMentality pic.twitter.com/BIAWFULJyi

It was only last summer that Bryant was selected to give the speech honoring Russell for the Arthur Ashe Courage Award at the ESPYs. Bryant began by acknowledging Russell as, “the biggest winner that sports has ever known,” and saluted his life’s work in the field of civil rights.

“Every generation has a responsibility to teach the next,” Bryant said of Russell. “One thing I learned about Bill is how he drew inspiration from his grandfather (Jake), whose motto was, ‘A man has to draw a line within himself that he will not allow any man to cross.’

“Bill learned from that, and added his own motto: ‘You disrespect the line, you disrespect me.’ More than 50 years later, Bill and his grandfather’s mottos still resonate powerfully and still speak loudly for Bill’s beliefs.”

Little surprise, then, that Russell saw fit to honor Bryant’s tragic passing on this day.

READ NEXT: Kevin Garnett: One Call to Kobe Bryant From Joining Lakers, Not Celtics?