In all, Draymond Green has 12 technical fouls this season. He claims to be a bit mellower this year, a bit more, “understanding,” to use his word, about Golden State’s situation, wracked by injury and in the league’s cellar since October. He’s accepted his role as a mentor, softened the hard edge that has so often defined him, for opponents and, at times, for teammates, too.

But 12 techs is a lot, most in the league. So before you accept the notion that Green has gone pillow-soft, check with the crowd of referees who have T’d him up this year.

“He leads the league in technical for a reason,” coach Steve Kerr told me recently. “He’s frustrated just like we all are. Losing stinks.”

Over the last four months, the Warriors have tried to put the best spin possible on this season. They lost Kevin Durant in free agency, bringing back D’Angelo Russell by sign-and-trade. They were without Klay Thompson as he recovers from ACL surgery. They lost Stephen Curry to a broken hand three games into the season. They swapped out Russell for Andrew Wiggins at the trade deadline.

The plus side: The Warriors have a real shot at the No. 1 pick this season and will likely get at least a Top 3 pick, and they brought back Minnesota’s first-rounder in next year’s draft, giving them a massive trade chip for the next year. Thompson and Curry will be 100 percent next season and well-rested.

Additionally, the team will have had time to develop young players like Marquese Chriss, Eric Paschall, Damion Lee and Ky Bowman, all of whom likely will have roles with next year’s edition of the Warriors. There are, too, the prospects of Jordan Poole and Alen Smailagic, who may not be ready to contribute next season.

And that’s the part that Green struggles to accept, no matter how much perspective and philosophy and forward-thinking he brings to the situation with the Warriors. The young Warriors are trying. But they’re still dead-last, comfortably behind the Cavaliers for that distinction.

“(Twelve) wins is 12 wins no matter how much effort you give,” Green said. “If you don’t turn it into wins, I guess it’s good for down the road. Still want to win a game. Or two. Or three.”

To understand how difficult this season has been for Green, bear in mind he has never known losing, at least not since he has been old enough to drive. Green latched onto the Warriors as a second-round pick in 2012, just after the franchise pulled itself out of its decades-long doldrums and began its dynasty run.

When Green was a rookie, the Warriors won 47 games and reached the second round of the playoffs. They won their first championship two years later and went to the Finals four straight times after that.

It was much the same in college. Green never knew a losing season at Michigan State and made the NCAA tournament all four years he was a Spartan. MSU played for the national championship game in his freshman year, reached the Final Four in his sophomore year and made the Sweet 16 when he was a senior.

Here’s how Green’s last 13 seasons, before this one, shaped up: 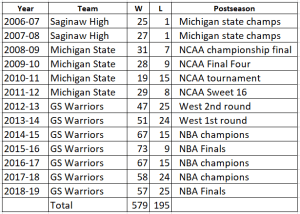 “You’ve Got to Lead the Young Guys”

Still, Kerr said he has been impressed by Green’s willingness to nudge his young teammates in the right direction. Not that Green himself is old—he is just 29, but that makes him the oldest active, healthy Warrior. In 40 of the 41 games he has started, Green has been joined in the starting five by at least one player who was either 22 years old or a rookie.

“Draymond is there for us every night,” Kerr said. “I try to get him rest when I can give it to him. In the meantime, we need him to be a mentor and a role model for these young guys and he’s doing a great job of it.”

Kerr calls Green the, “Lone Survivor,” because of the handful of Warriors players who ground their way through five straight seasons that went deep into June, Green is the only one who’s been healthy and on the floor since the start of the season.

Curry and Thompson are injured. Shaun Livingston retired. Andre Iguodala sat out more than half the year with Memphis before he was traded to Miami and took the floor for the Heat.

“Those are the only other four people on the planet who have played into the Finals five straight years,” Kerr said, “and they’re all getting a chance to step away.”

Green figured out pretty early on in the year that would be what the Warriors needed from him. “You’ve got to lead the young guys,” Green said. “That’s the role I’m in right now, it’s my responsibility, make sure I can do that. It’s moreso just understanding the circumstances and not being overly aggressive, like just trying to be more understanding.”

There could be a payoff next season. If Wiggins develops in his new surroundings, with Curry and Thompson coming back and Green still the defensive centerpiece, the Warriors will be in position to compete for the top spot in the Western Conference again. The team has gotten more confidence in Chriss as a potential starting center and the beginnings of a bench can be molded from the Lee-Bowman-Paschall trio of youngsters.

The Wiggins trade freed up the team from the luxury tax, meaning it can use exceptions this summer, including the trade exception it got from the Grizzlies in the Iguodala trade. More bench help will come that way.

And there’s this year’s draft pick, plus next year’s Timberwolves pick. The tools are in place for a revamp of this roster.

For Green, though, the excitement of next year is dampened by the muddle of this woebegone season.

“I think we can be good,” he said. “But I don’t spend every day thinking about how good we could be or will be next year.”

READ NEXT: Magic ‘Tried Hard’ to Trade Aaron Gordon to Warriors, Others

Read More
Basketball, Golden State Warriors, NBA
As the team contends with injuries, Draymond Green has been the Warriors' lone consistent veteran. It hasn't been easy.