Getty Tom Brady could look to once again team up with Antonio Brown.

With Tom Brady heading to the Tampa Bay Buccaneers, rumors continue to swirl that Antonio Brown could join the quarterback in his move to Florida. NFL Network’s Ian Rapoport reported that teams around the league believe Brady wants to bring Brown with him to Tampa Bay.

“As @TomPelissero and I discussed on TV, the word among teams interested in Tom Brady were among the impression that Brady wanted to bring Antonio Brown with him to a new team. Brown is still under investigation, and remains to be seen when he can play. But Brady is close with him,” Rapoport tweeted.

ESPN’s Dan Graziano and Jeremy Fowler reported at the NFL Combine that Brady had stayed in contact with Brown with the potential for the former Pro Bowl receiver to join him wherever he signed.

“Two people close to Antonio Brown — yes, that Antonio Brown — told us Brady keeps in consistent contact with Brown and has told Brown he wants to play with him wherever Brady goes next,” Graziano and Fowler detailed.

Weeks later Brady is now headed to the Buccaneers, but the question is whether Brown will join him. WEEI’s Dale Arnold reported that Brown could “eventually” land in Tampa Bay.

“More on @TomBrady to @Buccaneers: I’m told @Chargers made a late and legitimate “charge” but TB12 felt TB offered a better chance to win. And don’t be surprised if Antonio Brown is involved eventually,” Arnold reported on Twitter.

As Sports Illustrated’s Albert Breer pointed out, Buccaneers’ head coach Bruce Arians worked with Brown in Pittsburgh. That does not necessarily mean the receiver would be a good fit for the Bucs.

Just a year ago, Arians referred to Brown as a diva on The Adam Schefter Podcast.

“There’s too much miscommunication, too much … diva,” Arians explained, per NFL.com. “I’ve heard so many stories — I like Antonio — he plays as hard as anybody on Sunday, and he practices hard. He’s just gotta make better decisions off the field, be on time, do some of those little things.”

Arians went on to explain that Brown was a hard-working receiver early in his career and competed with Emmanuel Sanders when they were teammates. Brown took to Twitter to respond to Arians’ comments.

“He didn’t draft me he drafted @ESanders_10 same guy who missed rehab to go on networks to talk about me on situation he have zero clue! Arians now wears kangoo hats n glasses ? but ima diva! Done seen it all then they say we friends stop lien [sic],” Brown tweeted.

For Brown to join Brady, there would have to be some things ironed out between the receiver and Arians. Beyond their relationship, Brown also faces a potential suspension based on the NFL investigation in an alleged sexual assault. The NFL has not revealed their findings as Brown is not currently signed with a team.

If Brown signs with the Buccaneers, there is a good chance the receiver is not able to play the full season based on the investigation. That said, the receiver has made it known that he wants to play again with Brady after their short stint together with the Patriots.

It will be interesting to see what players join Brady in Tampa Bay. Be sure to check out our breakdown of why Melvin Gordon could be wearing a Bucs uniform next season. 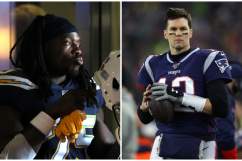