Getty Jadeveon Clowney is one of the top remaining NFL free agents.

The Jadeveon Clowney watch is well into week two of NFL free agency and the big question is whether the Seahawks’ wait will pay off in retaining their top pass rusher. Sports Illustrated’s Albert Breer noted that he believes that the “likelihood is he’s back in Seattle.”

One, Clowney’s injury history (he’s had microfracture surgery) is such where he’s getting dinged for the same reason Cam Newton is—an inability to meet with team doctors makes it difficult to prove that he’s not an enormous medical risk…

I know it was fairly well known in Houston that he wanted to join Frank Clark and DeMarcus Lawrence in the $20 million club after being franchised in 2019, and the Texans were never going there…So if you’re paying him what he wants, you’re doing that based on potential, and it’s tough to pay someone as banged up as Clowney’s been on that basis.

All of that is why I think the likelihood is he’s back in Seattle, maybe on a one-year deal.

The Seahawks would prefer to keep Clowney longer than one year, but at this point, it would be good news for Seattle to be able to retain the pass rusher, even if it is just a one-year guarantee. The News Tribune’s Gregg Bell reported that the Seahawks are willing to give Clowney a higher annual salary if he commits to a longer deal. So far, Clowney has not been pleased with any offers which could lead the defensive end to sign a one or two-year contract.

ESPN’s Adam Schefter indicated that Clowney is nieve if he believes that a new team will emerge to give him a long-term deal worth $20 million annually. Schefter noted that free agents rarely score massive contracts after the first few days of free agency.

“Listen, if you are a free agent when it gets to this point on Thursday night and you’re still on the market, I will break the news to you: You’re not getting the price that you wanted,” Schefter explained on ESPN. “Just not going to happen…Jadeveon Clowney came into this free-agent period wanting north of $20 million a year and he’s coming off a year where he had 31 tackles and three sacks. Teams like him, they think he is a good player, but they don’t view him as a north of $20 million a year player and he does. So the question becomes, at what point does he lower his expectations and then recognize what some of the teams do. And at what point is he willing to drop his price? And until he does that, then he could be sitting on the market.”

If Clowney does sign a one-year deal, it would benefit both parties to know sooner rather than later. Clowney is going to want to boost his numbers heading into the 2021 free-agent period and the best way to do this is to add more pieces around him to avoid being double-teamed. The longer Clowney’s negotiations go on, the more difficult it will be for the Seahawks to add pieces as the remaining players are signed. 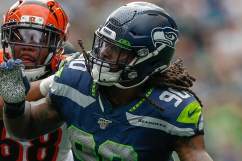