The New York Giants’ white-on-white color rush uniforms are one of the most beloved uniform combos in the modern-day NFL. They perfectly tie in a crisp, fresh look while still managing to pay homage to Big Blue’s throwback road unis of the mid-70s to late-90s.

Giants fans have been clamoring for the alternative look to become the team’s main away uniforms since the team debuted them back in 2016. While that’s yet to be put into effect, that hasn’t stopped fans from thinking even one step further.

Many feel a change is in order for a franchise that has gone under complete reconstruction over recent years. New general manager, new coach, new quarterback… new uniforms?

Pro Bowl running back Saquon Barkley appears to strongly agree with that sentiment.

Barkley shared a jersey swap image of him rocking a modern-take of the Giants’ home uniforms from the Lawrence Taylor, Phil Simms era in a recent Instagram story.

It’s safe to say that these uniforms get the Barkley’s stamp of approval, as the former Rookie of the Year captioned the photo “These would go crazy.” 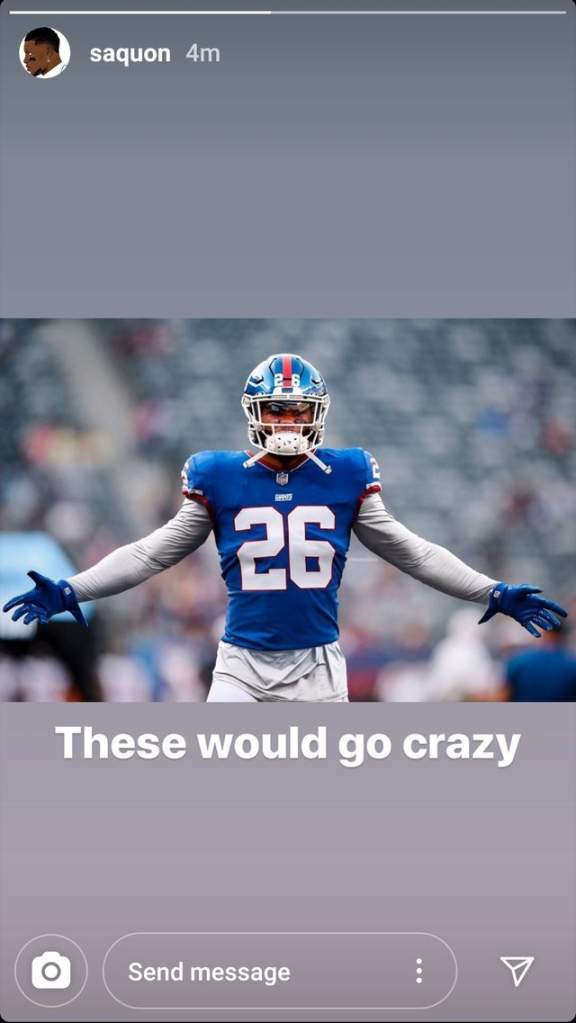 By the way, McManus didn’t stop there. He also tried his hand at creating a 1970s-inspired retro road uniform for Big Blue, calling on the help of Danny Dimes to model the threads.

Have yourself a look:

What do we say Giants fans? Should either of these uniforms be added to Big Blue’s wardrobe?

Barry Werner of Touchdown Wire recently ranked all 32 uniforms in the NFL from worst to first, and let’s just say, he’s far from a fan of Big Blue’s current look.

While the Giants’ current look could potentially be written off as boring, for the most part the team is well respected for their classic look. However, don’t count Werner in that latter group. While he noted that the “uniform definitely works for a historic franchise,” he also pegged their look as “basic.”

A basic and storied look is what gives the New York Giants their image. Big Blue is exactly that when it takes the field at home. The color and uniform definitely work for a historic franchise.

In Big Blue’s defense, Werner seems to be less fond of the more classic approach when it comes to uniforms, ranking both the Chicago Bears and Kansas City Chiefs within his bottom four.