What if the Chicago Bears could do it all over again? The writers at ESPN recently imagined a world where every NFL player was available on the open market; where free agent contracts were all null and void, and salary caps were non-existent. They then conducted a re-draft for all 32 NFL teams in which they re-built every single roster, selecting 128 of the league’s “foundational players” in a four-round draft.  The rest of each team’s roster is made up of average-level NFL talent.

Each NFL team got four picks in this league re-draft, with ESPN writers playing GM and making the selections. Jeff Dickerson, who covers the Bears for ESPN, did the selecting of draft picks for the Bears. Dickerson’s goal? To select a squad capable of winning a Super Bowl within five years. He had to select a quarterback, a non-QB offensive player and a defensive player, with the fourth pick being an open slot to select any player from any position.

Here’s who the Bears ended up with, courtesy of Dickerson, and, spoiler alert: Mitch Trubisky is nowhere to be found… 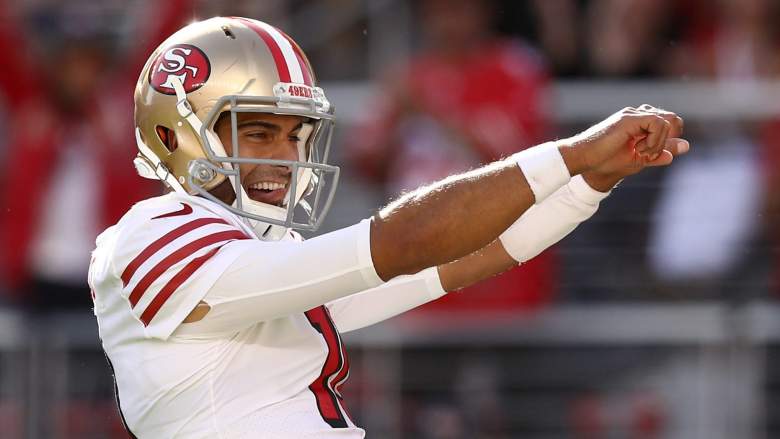 In the first round of the re-draft, Dickerson went with Illinois native Jimmy Garoppolo with the 19th overall pick. Many wanted Chicago to trade for Garoppolo back in 2017, but the San Francisco 49ers got him instead, and the Bears stuck with second overall pick Mitch Trubisky. Quarterback has been the Achilles’ Heel of the Bears franchise, and while some are not sold on Garoppolo as a franchise quarterback, there are also several beat writers and analysts who think he’s excellent, particularly when he’s in the right system.

Dickerson also selected running back Derrick Henry with the 46th pick in the second round, wide receiver Jerry Jeudy in the third round (83rd overall) and current Bears All-Pro safety Eddie Jackson with his fourth and final pick in round four (110th overall).

Here’s Dickerson’s rationale for the selections he made, where he expressed just one regret:

“I was determined to draft a quarterback in Round 1 and felt fortunate that Garoppolo was available. At 28 years old, he tied for fifth in touchdown passes (27) and took his team to the Super Bowl last year. And Henry, the NFL’s rushing champion, was a no-brainer for me in the second round. I wanted another offensive weapon, so I used my wild-card pick on Jeudy. My only regret is that I took Jeudy over Amari Cooper, who went four spots later. Hindsight is 20/20, but there’s no time to second-guess in my war room. I wrapped up the draft by addressing defense with ascending Pro Bowl safety Eddie Jackson. Translation: 12 victories and a berth in the conference championship game, at minimum.”

Would Garoppolo be an upgrade over Trubisky? If by some chance Trubisky comes alive, wins the starting job and plays better in 2020 than he did in 2018, probably not. But if Trubisky gets beat out by Nick Foles and fades into NFL obscurity, the Bears and their fans could only hope for someone of Garoppolo’s fundamental talents.