Journeyman quarterback Josh McCown played 17 seasons in the NFL with nine different teams, including the Chicago Bears, where he primarily served as Jay Cutler’s backup from 2011-2013. McCown did take over for an injured Cutler during the 2013 season, playing in eight games and starting five. He still holds the Bears’ single season record for passer rating (he tallied a 109.0 rating that year), and when he called into ESPN 1000’s Waddle & Silvy show Monday, McCown also shared his thoughts on the team’s current quarterback situation.

Co-host Tom Waddle, who played wide receiver for the Bears from 1989-1994 and has covered the team since the late 90s, asked McCown whether he thought Mitch Trubisky or Nick Foles would win the starting job. He wavered a bit before offering a surprising take on the maturity of Trubisky.

McCown on Bears QBs: Foles Would Win Job if This Were a Normal Season

At first, McCown said he felt the job was Trubisky’s to lose. “I think, given the situation, it’s hard, because I don’t know that Nick’s had an opportunity to compete and earn the job,” McCown said, pointing out the uniqueness of the upcoming NFL season due to COVID-19 restrictions.

“It would be hard to not go with what you know in Mitch, because you’ve played with Mitch before. So it would seem, unless they get a chance to go out and compete in the preseason, it’d be hard not to play Mitch. At the same time, I know there are guys there in the building that are familiar with Nick and what he can do. Nick’s been in a ton of systems, and he knows how to assimilate fast.” McCown then noted that if it weren’t for a global pandemic, the team’s quarterback competition would look very different. “If it were a normal offseason, maybe Nick pushes himself to the front, just from experience and veteran leadership.”

Waddle suggested Trubisky’s style of play could also be a factor. “Mitch makes a lot of plays on the edge and does things with his feet, buys time and makes some plays. A lot of those plays are whistled dead or aren’t really realistic in practice, in summer camp, or wherever you’re at. Is there a chance that Nick Foles just looks better because he’s a veteran?” Waddle asked, adding: “[Foles] knows the system and knows how to go through progressions and do the quarterback things that Mitch still looks to be learning.” McCown saw some logic in that perspective.

“Yeah. I think that’s fair,” McCown replied. “Nick’s played ball for stretches at a high level in this league.” Then, unsolicited, McCown gave Trubisky a bit of an endorsement while also offering a unique perspective on how Mitch may improve.

McCown Thinks Foles Could Be Instrumental in Trubisky’s Growth 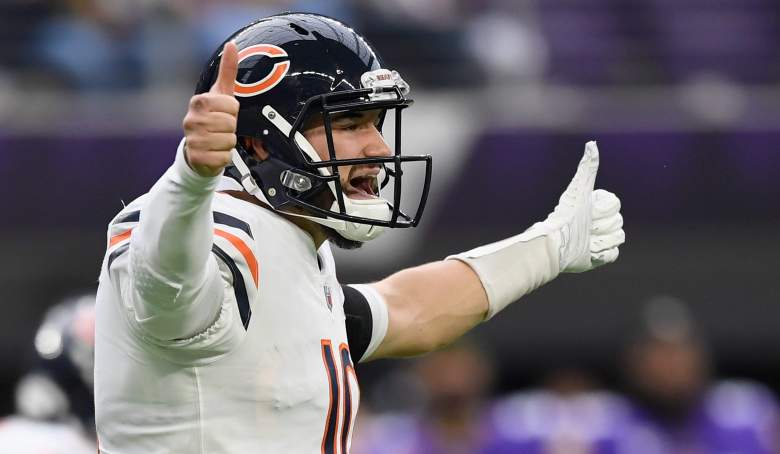 “I’ll say this. Man, I like Mitch Trubisky. I think the guy can play,” McCown said. “Sometimes, with different players — and I say this about myself as a young player — I was not nearly as accurate as a young player as I was … when I got with Tres [former Bears head coach Marc Trestman] and was playing in a system that kind of fit. Because I had changed systems every year of my career, I was learning systems and I wasn’t getting to learn the game as much as I was trying to figure out what ‘trips right’ was, you know what I mean?”

McCown also noted that while it’s impossible to predict when a quarterback may have that breakthrough where the game slows down for him, he thinks that moment is close for Trubisky — and he also thinks Foles may be a catalyst. “Mitch is close to that happening for him, but it may take watching Nick for a little while and letting Nick play to kind of allow Mitch’s confidence to come back around to where he can step into that and watch a guy like Nick play in that system.”

Trubisky’s Breakout Could Very Well Happen for Another Team

Could sitting behind a veteran like Foles for multiple games — or a full season — benefit Trubisky? Absolutely. Trouble is, the Bears are built to win now, and they don’t have time to wait several years for a breakthrough from a player they selected second overall. If Trubisky sits behind Foles this year, he may learn a great deal, but he likely will be playing elsewhere in 2021 if that happens. It’s also possible Foles starts, suffers an injury, and Trubisky takes over and balls out — it’s unlikely but not impossible.

McCown discussing his own experience finding the right system is also important to consider. Perhaps Trubisky has been too lasered in on the intricacies of learning Matt Nagy’s offense and hasn’t been able to focus on simply playing and learning the game. If that’s the case though, his potential breakthrough, should it occur, will also likely come in another uniform, as Nagy’s under contract through 2023. The Bears declined to pick up Trubisky’s fifth-year option this offseason, making 2020 a pivotal year for the young quarterback.

Thus, the Bears and their fans have to hope that the fourth year is the charm for Trubisky, who has undeniable talent, but hasn’t been able to put it all together on the field. If Nick Foles can contribute at all to the lights going on for Trubisky, then the veteran quarterback was worth every penny of his $24 million contract — but only if his guidance, as McCown suggests, helps Trubisky become the Bears’ quarterback of the future.

READ NEXT: NFL Rumors: Could Russell Wilson to the Bears in 2021 Be a Possibility?