Roy Robertson-Harris was just trying to enjoy his 27th birthday. The Chicago Bears’ defensive end was thanking several fans who had sent him well-wishes on his special day when a fan of the rival Green Bay Packers decided to troll him.

The fan ended up getting trolled and rolled in hilarious fashion.

Robertson-Harris will begin his fourth season with the Bears this year. He saw his role expand vastly last year when stud defensive end Akiem Hicks went down with an elbow injury. Robertson-Harris played in 15 games, starting seven. He was an undrafted free agent out of the University of Texas-El Paso when he came to Chicago in 2016, and he has developed into one of the better role-players in the league. He seems to be developing his social media game, as well.

Robertson-Harris took to Twitter and began thanking those who had wished him a happy birthday. A random fan of the Packers then decided to comment on one or more of RRH’s notes of thanks. In one tweet, he told Robertson-Harris to “shut up” and called him a “nobody player.”

Robertson-Harris didn’t start the exchange, but he finished it pretty swiftly. The Bears’ defensive end retweeted the vitriolic fan, clapping back like one of the WWE superstars he often emulates in his sack celebrations.

“Since you in my mentions all morning, I’ll give you the attention you cravin,” he wrote, before adding: “Enjoy your day.”

Since you in my mentions all morning I’ll give you the attention you cravin. Enjoy your day https://t.co/ZAM2VKdJ9A

Bears fans, of course, also came to RRH’s defense, but the defensive end didn’t need much help putting the Cheesehead in check. 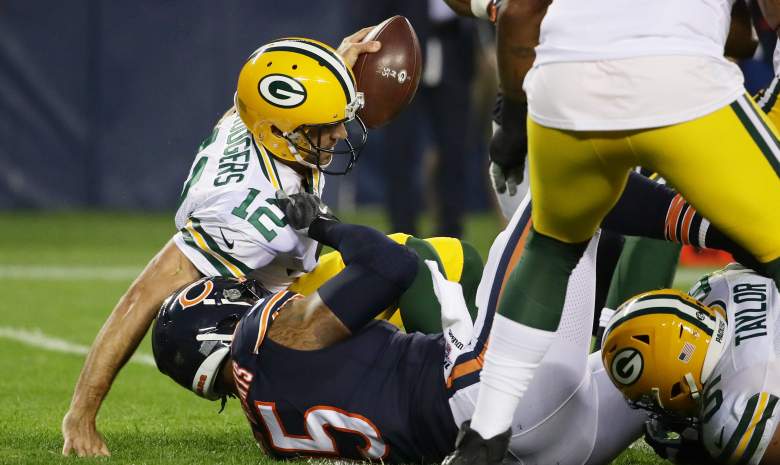 GettyRoy Robertson-Harris of the Chicago Bears gets a sack on Aaron Rodgers of the Green Bay Packers. RRH has fared quite well against the Pack over his first four seasons. (Photo by Jonathan Daniel/Getty Images)

Perhaps the Packer Fan Hate comes from the fact that Robertson-Harris has generally played well against Green Bay over the years. He has two sacks, three tackles for loss and two quarterback hits in four career games against Rodgers and company. He also inadvertently fractured Aaron Rodgers’ tibia while sacking the future Hall of Famer during a September 2018 contest.

RRH has said heading into this season that he’d like to add Tom Brady to the greats he has sacked, and the Bears will see the Bucs early in the season, so he’ll have that opportunity. He seems to relish playing against great players he also admires — like Rodgers.

“Rodgers I’ve sacked a couple of times. I’ve been able to get back there a few times… it’s always exciting to play against those guys. Guys that you’ve watched since you were a kid,” Robertson-Harris said earlier this offseason.

He’ll have one shot at Brady this year, and two more shots at Rodgers before other teams have a shot at him when he becomes an unrestricted free agent in 2021.

READ NEXT: Bears’ Play-Making Wide Receiver Could Be Salary Cap Casualty in 2020

Read More
Chicago Bears, Football, Green Bay Packers, NFL
The Chicago Bears defensive end was NOT about to entertain this kind of trash from a Packer fan -- especially not on his birthday.