Getty Khalil Mack of the Chicago Bears runs a drill during training camp.

Chicago Bears rookie Cole Kmet is already making an excellent first impression on coaches and teammates alike. The Bears selected the tight end out of Notre Dame with the 43rd overall pick this year with the hope that he’ll be their future at the position, and early indicators from Halas Hall suggest things are going swimmingly for Kmet, who met with the media after practice Thursday.

Via Zoom, Kmet discussed how he’s getting acclimated to the professional game, as well as what he thinks about playing for the team he worshipped growing up as a local kid in Arlington Heights, Illinois. Oh yeah, and he also talked about what it was like going up against No. 52.

Kmet, who is 6’6″ and 262 pounds, is a good-sized young tight end, but going up against the likes of All-Pro linebacker Khalil Mack is a humbling experience for most pros. When he was asked by NBC Sports’ Cam Ellis if he had his ‘Welcome to the NFL’ moment yet, Kmet let out a laugh, answered in the affirmative and revealed it was when he had to attempt to block Mack. “Yeah, for me it was the first day of pads and I had a cut-off block. I look up and I’m going against 52. So that’s a little wake-up call for me,” he said.

Kmet noted that later, after the play, he thought: “Wow, that was pretty cool. I just got to block Khalil Mack,” also adding that he felt privileged to go up against a defense as dominant as Chicago’s on a daily basis.

The rookie also shared what went through his mind when he walked through the doors of Halas Hall for the first time: “It was just a dream come true for me,” Kmet said. “When you’re a kid playing sports, you always dream of playing for your hometown team.” Now, Kmet is living the dream, and he’s already got his teammates singing his praises. 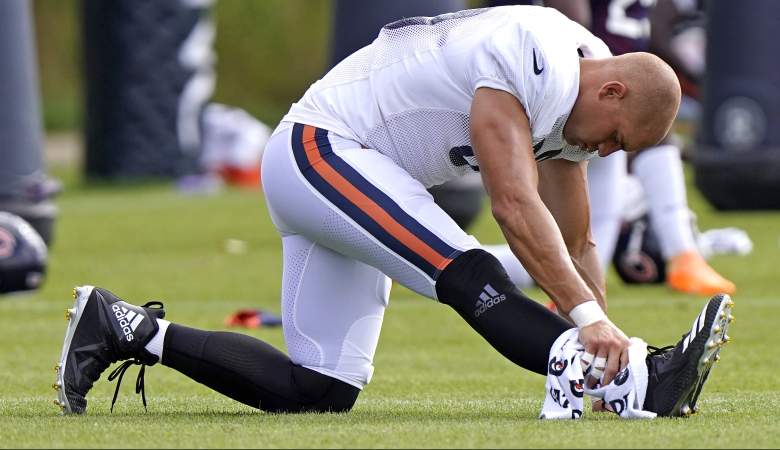 The Bears’ new veteran tight end, Jimmy Graham, also met with the media this week, and he had nothing but glowing things to say about the rookie.

“His football intelligence and his ability to soak in these plays and understand his assignments and to understand football and defenses is extremely impressive for a young kid,” Graham said about Kmet. “Also, he’s every bit of 260 (pounds). He reminds me of a young me. He’s got big legs, and the amount of potential that the kid has and the amount of talent that he has is truly unbelievable.”

Bears fans certainly hope Graham is correct — and if in fact iron sharpens iron, Kmet may get pretty sharp pretty quickly going up against Mack and company.

You can watch Kmet’s Zoom call with the media below:

READ NEXT: Bears Try Out 6 Players, Including Ex-Seahawks DT