Getty QB Kyle Sloter has spent time with the Minnesota Vikings and the Detroit Lions.

The Chicago Bears are reportedly working out ex-Minnesota Vikings and Detroit Lions backup quarterback Kyle Sloter, per Miles Garrett of WSBT Sports. Garrett, (not the Cleveland Browns’ defensive superstar) tweeted that he learned of Sloter’s tryout with the Bears via Facebook, and he shared the tryout will occur next week, after the quarterback has quarantined for a few days.

Per Facebook, FA QB Kyle Sloter will be working out for the #Bears next week after quarantining for a couple days.

Sloter was an undrafted free agent out of Southern Miss and Northern Colorado. He landed in Denver with the Broncos briefly in 2017 before winding up on the Vikings’ practice squad right after that. He then spent a few months on the Cardinals’ practice squad before he headed to Detroit, where he — you guessed it — played on the practice squad from November of 2019 until March, when the Lions released him.

Sloter, Preseason Standout,  Is the Latest QB Bears Are Bringing in to Challenge Tyler Bray

Sloter has no NFL experience, but then again, Bears’ current third-string quarterback Tyler Bray has just one single throwing attempt in an NFL game, so this could get interesting. Sloter has size (he’s 6-5 and 218 pounds), but he clearly lacks experience, and will be challenging Bray for a spot on the practice squad.

He is the second quarterback the team will reportedly be meeting with next week; Bears beat writer and analyst Daniel Greenberg reported Thursday that undrafted quarterback Mason Fine out of North Texas will be trying out with the team after he quarantines, so it looks like Mitch Trubisky and Nick Foles aren’t the only ones competing in the team’s quarterback room.

Sloter had a strong and memorable preseason showing with the Vikings last year. He led all NFC quarterbacks with a 146.9 passer rating over the 2019 preseason, and his stat line was beyond impressive. He was 23 of 27 for 280 yards and three touchdowns in limited action, and he ranked fourth in the NFC with a 114.1 passer rating when he played with the Vikings the prior preseason.

Could Sloter’s Strong Preseason History & NFC North Background Give Him an Advantage? 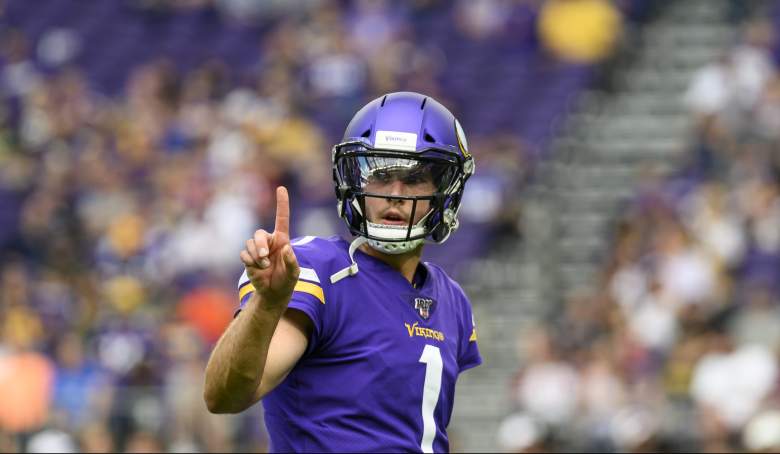 GettyQB Kyle Sloter had a memorable preseason with the Minnesota Vikings just one year ago. Could he manage to usurp incumbent Tyler Bray on the Bears’ practice squad? (Photo by Stephen Maturen/Getty Images)

Bray, who had a 99.6 passer rating over the preseason in 2019, performed well prior to the regular season, but not as well as Sloter has. Bray does have the benefit of spending the last two seasons on the Bears’ practice squad, learning Matt Nagy’s offense, which could help him immensely in a preseason shortened by a global pandemic. Still, Sloter’s resumé intrigues.

He spent only a few weeks in Minnesota in 2017, and he spent over a month with the Lions just last year. It’s very minimal insight, but he is semi-familiar with the offenses of two divisional foes. It certainly can’t hurt him in the competition.

The Bears have not yet confirmed their pending visit with Sloter, so as of now, this is still an unconfirmed rumor.