UFC president Dana White was called out by YouTuber Jake Paul on Saturday night via the social media celebrity’s Instagram account. Apparently, the 23-year-old American wasn’t happy with White’s recent rhetoric about him and his older brother Logan Paul, so Paul blasted the UFC boss via a series of entertaining Instagram stories.

“So the Alaskan bull worm, also known as Dana White, is back at it again. This bald b****!” Paul said.

You can watch the entire video below.

Paul Breaks Down Beef vs. White

“Let me break it down for you,” Paul said.

First, Paul showed a clip of White’s recent appearance on the “Shout!” podcast.

“You think I am [familiar with them]?” White said.

But Paul shows a screenshot of a video posted by KSI from two years ago entitled, “Dana White Talks About KSI vs. Logan Paul”.

Paul posted, “But you’ve been talking about us for 2 years?!”

Did you see Jake Paul's message to Dana White on IG? pic.twitter.com/IuSzKQvPKY

Next, Paul notes a TMZ video from “3 weeks ago” in which White was interviewed about Paul’s desire to face UFC superstar Conor McGregor in a boxing match.

Paul posted, “…but wait…it gets worse.”

The next video again shows White on the “Shout!” podcast. This time, White says neither of the Paul brothers can fight and that everything they do is some kind of gimmick.

“Neither one of these guys can fight. It’s all a big gimmick,” White said.

Paul mocks those statements by asking, “Is this is the same guy who let CM Punk fight in the UFC?!”

The video continues with White’s podcast appearance on “Shout!”.

“If people are dumb enough to spend their money watching that s***, I don’t know what to tell you. Good luck to them,” White said.

Paul shows a headline from MMAmania.com questioning why White told the media before the event that UFC 254: Khabib vs. Gaethje was tracking to smash records only to see it fall “way, way short” of the record.

According to Tapology, the best-selling UFC pay-per-view event of all-time was UFC 229: Khabib vs. McGregor at 2.4 million buys.

The next thing Paul shows in the video is another screenshot that indicates that the best-selling UFC pay-per-view event of 2020 was 1.3 million buys for UFC 251: Usman vs. Masvidal.

Then, Paul spends the rest of the video comparing how many more pay-per-view buys the Mike Tyson vs. Roy Jones Jr. event on Triller sold back in November than any of the UFC cards. 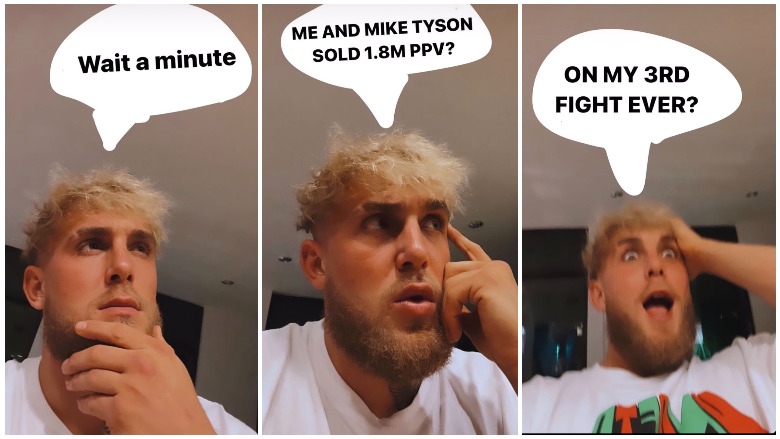 Of course, Paul scored a viral knockout against ex-NBA star Nate Robinson in the co-main event of that card, so the YouTuber believes he was a big part of the more than 1.6 million buys reported by USA Today and other outlets.

In his video, Paul suggests Tyson vs. Jones sold 1.8 million.

Regardless, Paul didn’t like how White said “good luck” to him and the people who buy him and his brother’s fights via pay-per-view.

“No, Dana, good luck to you because you’ll f***ing need it. I hope you find those 500,000 extra pay-per-view buys somewhere. Maybe this will help you, but I’m done talking about your old head a**,” Paul said.

The last screen in Paul’s video says something he’s suggested before.

Paul believes White won’t let McGregor or another UFC fighter face Paul inside a boxing ring because the UFC boss is “afraid” Paul would win the fight and “embarrass” White and his company.

Loading more stories
Watch a celebrity break down his beef vs. UFC president Dana White in an epic video from Instagram.