So here we are, nine years after The Chronicles of Riddick and our eponymous ass-kicker is back on our screens in Riddick. After being betrayed by the Necromongers and left on a desolate planet for the vulture-like creatures to pick his bones, Riddick (Vin Diesel) is slowly returning to his powers as he battles for his survival against alien predators and a crack team of bounty hunters.

Heavy was treated to an advanced IMAX screening of the movie a few days before release, and this is the only way to see it. The action sequences across the plains of this desolate planet are epic. Beginning with Riddick’s battles with the CGI’d alien predators early on to his later fights with the human villains, every inch of the massive screen is filled with action.

As Riddick looks over his shoulder, isolated and alone, the IMAX sound system puts the viewer right alongside our hero, fearing for our own lives. The first third of the film comes along with a Martin Sheen/Apocalypse Now style voice over, acting as Riddick’s inner monologue, allowing us to empathize with him as he goes on a murderous rampage later on in the movie.

Obviously, this is not a perfect movie; you won’t be hearing Oscar buzz about this one. The moments of corny dialogue will make you laugh and cringe, occasionally at the same time. Portions of Diesel’s lines and a late-on ass-grope of the beautiful Katee Sackhoff are clearly intended to be cheesey, almost to get a cheap laugh. There are other times, particularly in the case of Jordi Molla, the Spanish actor who plays Santana, the leader of the bounty-hunters. One of his lines about an anecdote coming out of “a unicorn’s ass” left me cringing and confused, a rare combination, perhaps as rare as a “unicorn’s ass.”

Fans of the series will not be taken aback by these shortcomings. Writer/director David Twohy clearly treats his creation, Riddick, with great care. Not just the character himself but the entire world that he inhabits. Twohy finished the script for Riddick in 2009; the movie’s subtitle at that time was Dead Man Stalking, the kind of pun that might have been used by one of the characters. Filming didn’t begin till January 2012 and was wrapped up in March 2012. Diesel had said he wanted the shooting to be “clean.” It feels clean in watching it, a very tight story with a definite purpose. It’s a clear vehicle for Diesel. There’s no other stars in this one. Sci-fi fans will recognize a few faces, and WWE fans will recognize man-mountain Dave Bautista as one of the bounty-hunters, but other than that, we are in Diesel’s world. 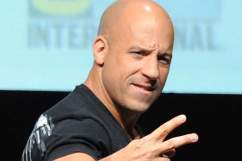 Vin Diesel to Play Groot in Marvel’s ‘Guardians of the Galaxy’?

VERDICT: While I’m not a loyal fan of the series, I thought I knew what to expect with this one. There are some pretty cool actions sequences and deaths, but I was surprised with how bad some of the dialogue was and how the plot played out so predictably. Once we meet our full array of human stars, only an idiot wouldn’t be able to pick out which ones were going to make it to the end.

With all that in mind, if you’ve seen the other two movies in the series, you’ll probably go and see this no matter what reviews say. If you’re a casual fan and are still going, do me a favor, have a shot of tequila before you take your seat. You’ll thank me for it.