To say that Shirley MacLaine has had a long career seems to be an understatement. Having just turned 80, she continues to be a relevant Hollywood icon, earning spots on two shows, Glee and Downton Abbey, that are popular with millennials worldwide.

Tonight, she’ll be making her debut on Glee as June Dolloway, a socialite who takes a liking to Blaine.

She told Entertainment Weekly that her young friends were excited for her new role:

Sometimes I do, sometimes I don’t. It’s one of those things. Love the talent of all the kids, love that they can do so much in a week. It’s extraordinary. All my young friends really loved the idea [of me doing the show]. I don’t know why, but they do!

1. She Called ‘Glee’ a ‘Talent Bootcamp’

She was intrigued by how well the cast works in such a short time. “I was fascinated by how they retain six songs in four days. How do they do that?” she said.

In the episode, she sings Janis Joplin’s “Piece of My Heart” with Blaine.

She gushed about her costar, Darren Criss, saying, “Oh, he’s really a darling guy. He’s a pro, so he does all the pro things, and he was very helpful to me because he’s used to this rhythm.”

Playing the wealthy New Yorker was a real treat for MacLaine.

She’s wonderfully dramatic, funny, can be hard honest, and she’s a tastemaker. Her reputation is based completely on how she finds talent and she’s right about it…she’s flamboyant, and by the way, has a great wardrobe. That’s another good reason why I did it.

2. She Was the Only Woman in The Rat Pack

#SuperSoulSunday Shirley MacLaine's journey today is so amazing and love seeing the Rat Pack Era through her eyes. pic.twitter.com/ilgRsJyMDj

She was the only girl in the iconic group of men, which consisted of Frank Sinatra, Dean Martin, Sammy Davis, Jr., Peter Lawford, and Joey Bishop.

In the 1960’s, the group appeared in many movies and shows together, and she was known as their mascot.

In an interview with the CNN, she made it clear that it didn’t get romantic with any of them.

I was the one who would pick up the crackers and the jelly beans. And answer the door. And I always told them the truth, I really did. And that’s why, I think, they liked me.

Who says 80 is old? pic.twitter.com/QnrHQeF4UM

She is definitely keeping up with her younger costars, and has an iPhone and Twitter. In fact, she is taking over the Glee Twitter account on April 29, when her episode airs on the East Coast.

As far as the internet goes, she told Entertainment Weekly, “I like it all, I think there’s wonderful potential for the future, but I’m not even interested in whether I washed my hair today.”

4. She Heard About ‘Downton Abbey’ at the Hairdresser

Joining the show in Season 3, MacLaine is Martha Levinson, the mother of Lady Cora.

“She has her own Shirley approach to everything, and it was so refreshing,” said Elizabeth McGovern, who plays Lady Cora.

With the new generation, she is now identified as a member of that cast, and MacLaine doesn’t seem to mind the switch.

My whole identity is now Downton Abbey. All that I’ve done – how many films? All my books? I’m no longer a new-age giddy dingbat. I am now ‘the one on Downton Abbey‘. In airports and other places I go, they say, ‘Downton Abbey, when are you coming back?’

Before she was cast in the British drama, she had heard snippets about it while getting her hair done.

She told the New York Times:

5. She is Known for This Hospital Scene

For her role in Terms of Endearment, she won an Academy Award.

In the scene above, which she did in one take, she becomes hysterical when her dying daughter, played by Debra Winger, is not given her pain shot on time.

Peter Marks from The Washington Post calls the powerful moment the reason that, “probably earned her the only Oscar she ever has won.” 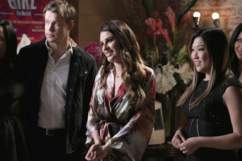