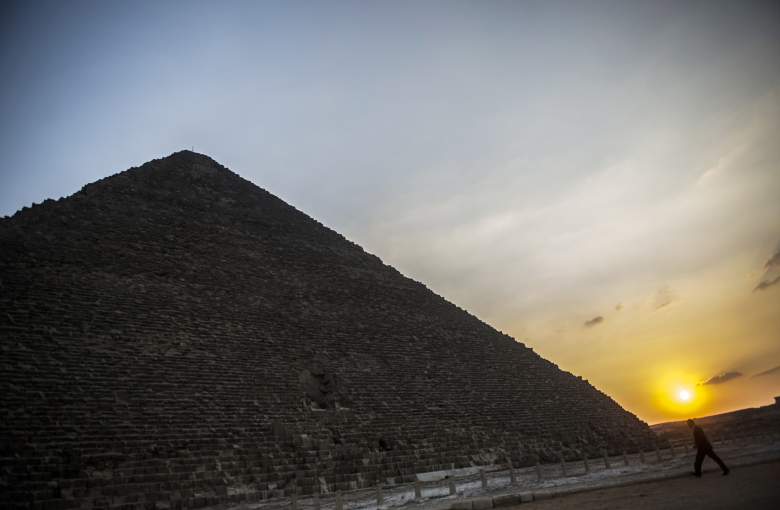 A man walks towards Giza’s Pyramid of Khufu on the southern outskirts of Cairo. Are there similar pyramids in Antarctica? (Getty)

Tonight, Ancient Aliens’ premiere episode for the new season is scheduled to be about “Pyramids of Antarctica.” But are there really any pyramids in this snowy, icy world? Unfortunately, rumors that circulated several years ago were later debunked. Will Ancient Aliens add any new information to the mix?

Several years ago, the Internet was filled with stories about explorers who found pyramids in Antarctica. The most frequently repeated story was tracked down as originating from a website called Voice of Russia, later renamed Sputnik News. You can read one of the first stories, from 2013, here.

According to the rumors, a team of European and American scientists had found three ancient pyramids, two which were 16 kilometers inland and one near the coast. But the details in the stories were always very sparse. Websites included pictures, such as this article, and a link to an article on ScienceRay, which purportedly included photos, was often posted (which no longer works.) The story traveled across the Internet, but it wasn’t verifiable. The names of the explorers weren’t shared and more details were never available.

Back in 2012, a discussion about the articles appeared on a Google message board here, where one poster noticed something interesting. He said the story had circulated for a very long time, but someone had recently “republished” the story with three images. He noted that the sources of the images, which appeared with the story, were not of pyramids in Antarctica. One photo was from International Mountain Guides and one was from the Integrated Ocean Drilling Program. The third, according to another submitter, may have been of the Schatz Ridge near Sentinel Range.

Some theorize that the photos used are likely of “glacial horns,” such as the Matterhorn which is on the border between Switzerland and Italy in Europe.

Those who want to believe in the pyramid theory point to the idea that Antarctica may not have always been covered in ice. They sometimes mention the ancient Piri Reis map and the theory that it shows the coastline without ice. The Piri Reis map is a world map made in 1513 based on military intelligence from the Ottoman admiral Piri Reis. About 1/3 of the map still survives. Some claim that it shows prehistoric exploration of Antarctica, along with notes that the climate was warm. But other experts dispute this claim and say that it either depicts a South American coast in that region or is just a guess and not based on genuine knowledge. Bad Archaeology addressed the idea of ancient civilizations in Antarctica back in 2007.

Most scientists disagree with the idea that Antarctica has pyramids or lost civilizations. But you’ll likely still find romantics who point to the Piri Reis map and other findings and insist that what is deemed impossible might not be.

Do you think there are really pyramids in Antarctica? Let us know in the comments below.