Is Amber Rose getting with Migos rapper Offset?

Rose, whose past relationships include Kanye West and Wiz Khalifa, has been spotted with the Migos rapper at his concert in Jacksonville, where the two were reportedly getting very close with one another.

According to media outlet Fameolous, a fellow attendee at the concert took to social media to say that they saw Rose and Offset together and that “she got into the vehicle with Offset “while fellow Migos members Quavo and Takeoff departed the concert in a separate vehicle.

Further fuel was added to the fire when a picture surfaced of Rose and Offset dancing together at a club. “Offset winning with Amber or nah?” said the caption, sparking debate among fans as to whether the candid picture meant anything or whether it was harmless flirtation. Especially given Rose’s past, which has included rumored relationships with musicians Chris Brown, Nick Cannon, and French Montana, that were later said to be false.

Rose recently spoke on her ideal man in an interview with The Tomorrow Show, saying that she likes “guys that are articulate and that can teach me something you know if I taught like that’s why I really don’t date like ball players and stuff, like I’ve tried but I’m turned off because they’re not very smart — most of them I don’t want to say all of them…but most of them are kind of airheads and I’m just, I can’t.”

As for Offset (born Kiari Kendrell Cephus), he isn’t the only Migos member who’s been linked to a celebrity romance. Earlier this year, Quavo was seen embracing model and former Chris Brown girlfriend Karrueche Tran after a concert in Mississippi. TMZ even caught footage of the couples together, which caused Brown to claim that he felt “stabbed in the back” by Quavo, as he has collaborated with the rapper on songs like “Hold Up” and “Moses” in the past. According to BET, Brown even believes that Quavo had a hand in the restraining order that Tran filed in February. 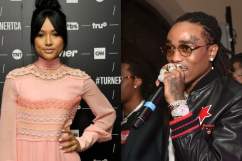