Ben Affleck confirmed during the Warner Bros. Pictures San Diego Comic Con panel that he’s still Batman, despite rumors that he might be leaving the role early. Affleck insisted that he’s still interested in playing Batman, even though he’s not directing the upcoming Batman movie.

Ben Affleck confirms that he is not going anywhere and that he's all in as BATMAN #SDCC #SDCC2017 pic.twitter.com/qqxxajfvG6

“I am the luckiest guy in the world. Batman is the coolest (…) character in any universe – DC, Marvel – and I’m so thrilled to do it,” Affleck told the Hall H crowd.

Affleck joked that he would play a “f***ng ape” for director Matt Reeves, who has made two Planet of the Apes movies. He insisted that he’s still “excited” to be Batman.

Here is the video of Ben Affleck confirming that he is still Batman and is all in for the role #SDCC #SDCC2017 pic.twitter.com/hdzPGHeX6M

Affleck’s comments come a day after a Hollywood Reporter report that Affleck’s future with the DC Extended Universe was in doubt. That report also came after news that the new director, War of the Planet of the Apes director Matt Reeves, decided to ditch the script Affleck and DC Chief Creative Officer Geoff Johns wrote together.

“Ben is our Batman. We love him as Batman. We want to keep him in the cowl as long as we can,” Warner Bros. studio chief Toby Emmerich told THR.

The film, titled The Batman, doesn’t have a release date yet, but Reeves is already seeing the big picture. In an interview with Fandango, Reeves said he was thinking of a making a Batman trilogy, not just a single movie.

“I have ideas about an arc, but really, the important thing is just to start… you have to start with one,” Reeves told Fandango. “You know, you have to start with a story that begins something. And I would be lying if I could tell you that the arcs of Apes was already planned out, because it simply wasn’t; it’s one of those things where that character was so potent, and the possibility was embedded from the beginning, but exactly how you’ve got from A to Z is not something that existed.”

THR’s report also suggested that Warner Bros. was looking for a way to transition from the Affleck Batman to another Batman. Considering that the studio also announced today that the solo Flash movie is now an adaptation of Flashpoint, that transition could have been made easier. In the original Flashpoint story, written by Johns, The Flash met an alternate universe Batman, who was really Thomas Wayne, a gun-toting Batman obsessed with revenge for the murder of his son Bruce and wife Martha.

But if Affleck’s comments at SDCC is any indication, it looks like Batfleck will continue to fight crime on the big screen.

Affleck debuted as an older version of Batman in Batman v Superman: Dawn of Justice, then appeared in Suicide Squad. He plays Batman again in Justice League, which opens in November. 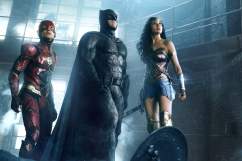