Tomorrow on Good Morning America, the new season 25 cast for Dancing With the Stars will be revealed. So far, there have been a couple confirmed contestants and all of the pro dancers have been announced. The list of pros this season are:

As far as this season’s contestants go, read on for the details on the reported and rumored celebrities who may be on the show for fall 2017. But, if you are interested in tuning in for the live reveal of the actual stars who are part of season 25, click here.

@mrdrewscott and @theemmaslater are our first official couple of Season 25! Don't miss the full cast reveal in one week on @goodmorningamerica. #DWTS

One half of the Property Brothers has been confirmed as joining the cast this season. While he may be handy with home renovations, viewers will have to see if he can cut it in the ballroom. This season, he is paired with pro Emma Slater.

Thank you #bellaarmy & @toysrus for the incredible appearance today! Still feel like I'm dreaming being an empowering, fearless Barbie! Thank you all for continuing to put so much love in my heart and soul and a massive smile on my face!???Love you Bella Army SO much! ??

Pro wrestler Nikki Bella is another twin who is reportedly joining the cast, according to E! News. Bella currently has some time off because she is inactive with the WWE due to an injury.

So honored and proud to be a part of @People Magazine's World's #MostBeautiful A shout out to my husband for his love, support & GENES! ? @nicklachey you make our family Beautiful both inside & out! We Love YOU! #LacheyPartyOf5 ????????????

This celebrity couple is said to be joining the show, according to People. And, wouldn’t it be fun if they were paired with celebrity pro couple Maksim Chmerkovskiy and Peta Murgatroyd?

Was your guess a touchdown? Help us welcome @terrellowens to Season 25! #DWTS

This morning, football player Terrell Owens was revealed on Good Morning America as an official contestant and he is paired with pro Cheryl Burke. While Burke says that Owens has some rhythm, he said on GMA that:

Just the rhythm is not the issue, just really trying to incorporate everything she’s teaching. Really going to let her take the lead and I’ll follow … I didn’t have much going on at the moment … when they said Cheryl would probably be my partner, I said ‘OK, cool. Checkmark.’

Got my first win on the Golf Channel AM Tour today in the Scottsdale Open!! Thanks to @wilsongolf for all my gear and to my amazing caddie @price.paige!

Actor Frankie Muniz was reportedly spotted leaving rehearsals and Witney Carson is said to be his partner this season. Many know Muniz from the sitcom Malcolm in the Middle.

E! reports that singer and actor Jordan Fisher is joining the show. Fisher has appeared in Fox’s Grease Live and on the Disney Channel’s Teen Beach Movie. According to E!, Fisher may be paired with pro dancer Lindsay Arnold this season.

NBA star Derek Fisher has been rumored to have joined the cast this season and Fisher has played for the Los Angeles Lakers, but more recently, he has coached the Knicks.

Vacations are the best way to recharge your soul. Put aside the days for your next vacation now and you'll get half the benefit knowing it's coming!

Another cast member from Shark Tank is reported to be on the show by E! News. That’s right, shark Barbara Corcoran is said to be joining the cast, just as Robert Herjavec did in the past. And, Herjavec actually ended up marrying his pro partner, Kym Johnson.

Paralympic swimmer Victoria Arlen has been reported by Entertainment Tonight as a cast member on the show and a source says that Val Chmerkovskiy is her partner. The source revealed:

Val is beyond excited about his partner this season. He’s completely re-energized and is feeling really optimistic about this season. 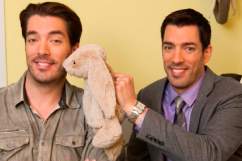 ‘Property Brothers’ Drew & Jonathan Scott: Are They Married or Single?