Getty Connie Britton and Dylan McDermott are returning for American Horror Story: Apocalypse, reprising their roles as the Harmon's after a long absence from the show.

Connie Britton and Dylon McDermott are returning to American Horror Story for the highly anticipated Murder House–Coven crossover, according to the Hollywood Reporter.

The two played Ben and Vivien Harmon in season one, marking the return of two more original key actors that kicked off the anthology series eight years ago. The Harmon’s and their daughter Violet moved into Murder House after Ben was caught cheating on Vivien, in a last ditch effort to repair their marriage and save their family. Unfortunately, things didn’t end so well for the Harmon’s, but fans are definitely excited to see them return.

McDermott also appeared in season two, Asylum, playing a different character; Britton only appeared in the first season. Taissa Farmiga, who played Violet, has appeared in several of the AHS seasons, but hasn’t really seen much AHS action since Coven, although she did have a short cameo in Roanoke.

The highly anticipated eighth season will be a crossover between two of the show’s most popular seasons: Murder House (season 1) and Coven (season 3), according to creator Ryan Murphy.

“It’s a season unlike anything we’ve done because there’s a big hook to it. There’s a huge thing that happens in episode 5.”

For those who need to be brought up to speed, Murder House ended with Vivian giving birth to the Antichrist just before her death. The baby, named Michael Langdon, is the product of Tate Langdon (Evan Peters) raping Vivian. Sarah Paulson’s character Billie Dean Howard, a medium that occasionally interacted with the dead in Murder House, predicted that the offspring of the dead and the living would one day bring about the end of days. The rest of the Harmon family died at the end of the season, their spirits trapped in the Murder House for eternity.

Michael is raised by Constance after the Harmon’s are all killed and left to remain in Murder House forever.  The final scene of the season shows the toddler smiling and laughing while dripping in blood after murdering Constance’s housekeeper.

Actor Cody Fern has signed on to portray Michael Langdon, the satanic spawn of Vivian Harmon and Tate Langdon in the series.

Despite the highly anticipated crossover, the end of the world will definitely be the theme of Apocalypse, which will open with a cataclysmic event. Set in the near future, Murphy has placed the date of Apocalypse around October 2019, according to the Hollywood Reporter.

“The story begins with the end of times,” executive producer Alexis Martin Woodall recently revealed. “It starts in the real world. It’s very tangible, and it’s a familiar panic.”

The eighth season will also see the long-awaited return of Jessica Lange, who will reprise her Golden Globe-winning character Constance Langdon from “Muder House.” 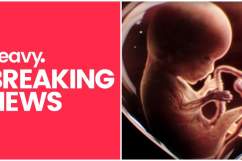