Jennifer Lopez is this year’s Michael Jackson Video Vanguard Award recipient and, in honor of the big award, JLo has taken the stage at the 2018 MTV Video Music Awards, aka the VMAs, for a killer performance. Lopez kicked off the show with a sultry rendition of her song “Waiting for Tonight,” followed up by her hit “On the Floor”. JLo appeared to almost be floating as she dazzled in a Versace-looking cape.

Soon, Lopez’s back up dancers left the stage and she stripped down to a sexy, gold one-piece. She then busted out some fierce dance moves to a few of her newer hit songs. Female back up dancers then appeared with light sticks to accompany JLo in her moves.

Then Lopez went through a medley of her older hits like “Love Don’t Cost a Thing” and “Get Right. And, of course, she shook her money-maker, that iconic derriere, as boyfriend Alex Rodriguez danced and smiled from the audience.

Not sure what we did to deserve that epic @jlo concert but I’m grateful. Congrats on the Video Vanguard Award Jen – well deserved! #VMAs pic.twitter.com/TDUeXhzNqU

JLo then slowed things down with her song “All I Have” and she put on a fur coat as she sang to the crowd. As JLo left the stage, DJ Khaled approached and several male back up dancers, dressed in gold, carried on a routine to kill time. “Jenny From the Block” then appeared on a subway train set. Soon, Ja Rule popped up to join JLo in a brief performance of their songs, including “I’m Real” and “Ain’t That Funny”. And, of course, JLo had to shake that butt of hers when Ja Rule shouted out, “It must be the ass …”

JLo, donning a gold, hooded outfit then moved on to her hit song “Dinero”, as her man, ARod filmed her on his cell phone, in the front row, looking in awe.

The crowd went wild for the performance.

This morning on Today With Kathie Lee & Hoda, Jennifer Lopez’s interview with Hoda Kotb about tonight’s big performance was featured and the hosts couldn’t help but notice how grateful Lopez was for her Michael Jackson Video Vanguard Award. Kotb reminded audiences that JLo is 49 years old, but is always looking for the next big challenge because she is always about growth. Kotb said that it’s so inspiring because so many people become bored with their lives and daily routine. Lopez said that she never wants to get stuck in a time or a feeling and that she always wants to keep evolving and changing.

When sitting down with the star, Kotb revealed that JLo is actually the first Latin artist to receive the Video Vanguard Award. JLo said that to get an award like this is really like “every little girl’s fantasy come true.” The triple threat diva also said that, “It’s a big night to be recognized for, kind of a body of work, of music, of videos, and your impact … or whatever you call it. I don’t know. I can’t even talk about myself like that, it’s so stupid.” After a laugh, she continued, saying, “I just feel like really, really lucky.”

JLo said she grew up in the MTV Total Request Live generation, watching videos all day. She said her generation didn’t have cell phones to play on constantly and that learning about entertainment was her focus. So, it’s quite fitting to be receiving such a high award from the network she’d been watching since she was a kid.

JLo has been a pioneer in fashion, music and in body image over the years. Before the Kardashians made their big splash with their famous derrieres, Jennifer Lopez paved the way with her famous butt. She was one of the first women to truly embrace her curves in the entertainment industry. And, before women were used to showing major skin and risque looks on the red carpet, JLo made a controversial splash, wearing a plunging green, Versace dress on the red carpet of the 2000 Grammys. The LA Times reported that the dress, which was open down to JLo’s belly button, has since become iconic. 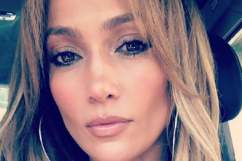 Read More
Celebrities, Jennifer Lopez, MTV, TV, VMAs
Before the Kardashians, there was Jennifer Lopez's sexy butt. Watch JLo shake it in a killer performance at the 2018 VMAs tonight for her Video Vanguard Award.