Last season on Shahs of Sunset, Mercedes “MJ” Javid’s father, Shams, was recovering from a stroke and his health was in jeopardy. MJ and her family struggled through the experience and gave viewers a glimpse at Shams’ ailing health, bringing the cameras along on a couple hospital visits. Upon seeing MJ’s bed-ridden dad, fellow cast member Reza Farahan became very emotional. The situation also clearly took its toll on MJ, who previously said on Watch What Happens Live that, “I lived for my dad. It was really hard. I was in denial. I didn’t know how to handle it.”

On May 18, 2018, MJ announced her father’s death on her Instagram profile, in a heart-breaking post. MJ wrote, “It is with great regret that I share the news of my sweet father’s passing. Although this is something extremely personal for me and it’s taken some time to process, those of you who have followed my journey know how much I love my father. I am comforted knowing he is in a better place now. I am so thankful for my mom, Tommy, my family and friends, who have been incredibly supportive through this greatest loss. #MyEndlessLove.”

MJ continues to post photos of her father on her social media accounts, along with sweet words such as, “I am the luckiest girl in the world. Every single morning, my father would greet me with, “Good moooorning, sweetheart”. He will always be the sweetest, most generous, loving man in the universe. When we were together, every day was Father’s day. This will be the very first Father’s Day that we are not physically together, but definitely in spirit. #MyEndlessLove #UntilWeMeetAgain.”

It is with great regret that I share the news of my sweet father’s passing. Although this is something extremely personal for me and it’s taken some time to process, those of you who have followed my journey know how much I love my father. I am comforted knowing he is in a better place now. I am so thankful for my mom, Tommy, my family and friends, who have been incredibly supportive through this greatest loss. #MyEndlessLove

Fortunately for MJ, it wasn’t until after her wedding that her father, Shams, passed away. MJ and husband Tommy Feight married on April 21, 2018, but Shams was not able to walk his daughter down the aisle. According to Page Six, MJ previously revealed that, “He was not able to walk me down the aisle because unfortunately the day after Christmas he got really sick and he had been really healthy for a really long time.”

She continued, “Uh, like a year he was in pretty stable health, and yeah, it’s definitely part of the reason why I think I def — I, I think I kinda tapped out emotionally, cause, and I, sometimes you kinda catch a glimpse of yourself when you’re not noticing and I definitely think there’s a sadness that is undeniable because there are things like that, that weren’t able to pan out. And, you know, I definitely, um, didn’t want my sadness to sort of, you know, ink into everybody else’s day.”

MJ and her mother, Vida, often argue, but MJ said that growing up, her dad was truly there for her. In an interview with The Huffington Post, MJ said that, “What a lot of people don’t know was that my dad was the ‘single mom’ raising me. He’s the quieter person not featured on the show. He has always been my best friend, the one who picked me up from school, nursery through college. My friends and I would walk over and tell my dad everything, so now talking about my dad is important to me.”

Today, MJ told The Daily Dish that she continues to deal with the loss of her dad. After being asked how she and her family are doing since Shams’ death, she explained, “It’s a very difficult question to answer emotionally or to articulate. I’m sure that a part of me has died and will never be back. My only hope is that he’s on his way to reincarnate himself as one of my children. So that’s what I’m going with.”

MJ has also revealed that her mom, Vida, has softened a bit over the months. So, that’s a more positive change.

A love like no other. So lucky to be his daughter. Until we meet again. He will always be #myendlesslove

According to the NY Times, Shams Javid came to the United States in 1963 and became a citizen in 1970. He went on to work at Iran’s Embassy as a purchasing officer and then as an immigration consultant. 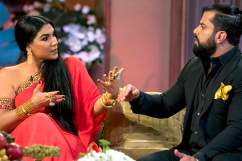