Camille Grammer may not be a full-time housewife on Real Housewives of Beverly Hills, but she is a veteran on the show and her wedding celebrations are taking center stage this season. She has also been present and hosted some of the biggest events on the show so far this season, from her big birthday bash to her bridal shower.

According to People, Grammer and her husband David C. Meyer tied the knot in October 2018, at a private beach club in Hawaii. Grammer, who owns a home in the area, told People, “Hawaii is my special place. I have so much respect for the Hawaiian culture. It’s all about ohana, family, love, respect for the land and respect for each other.”

Housewives including Kyle Richards, Dorit Kemsley, Lisa Rinna, and Teddi Mellencamp were all in attendance. In fact, Richards was reportedly a bridesmaid, according to The Daily Dish. Richards confessed to Bravo, “I scored an invitation to be a bridesmaid — who knew? All these years later. I mean, if you think back to season one Camille and Kyle, you would never imagine that one day she would be marrying somebody else and I would be her bridesmaid.”

Thank you for making our special day so wonderful @theajohnston @colonnarose @kylerichards18 @mason.grammer and Karen Huner my lovely bridesmaids. My parents for being there for me always. My beautiful children ❤️ Thank you @malanbreton and @theimageguru for the perfect gown. @ricardoferrise1 hair and a makeup. Justin Kleohano-Hauanio, Hawaii Creative Beauty. @people All of guests and handsome groomsmen. ? @alexwphotography@

Grammer’s wedding dress was made by designer Malan Breton and she recalled, “It was like something out of a fairy tale. And there was a rainbow. To me, that means we’ve made it over the rainbow and found each other. This is our new life.”

Unfortunately, this season on RHOBH, it isn’t all sunshine and rainbows for Grammer and her new hubby. She actually loses her home to the California wildfires, which is devastating.

When Real Housewives fans first met Camille Grammer, she was married to Frasier actor Kelsey Grammer. Page Six reported that the two were married from 1997 to 2011 and they had two children together – daughter Mason and son Jude. Fans watched the couple’s marriage unravel, with claims of infidelity against the actor.

Since the divorce, Grammer has said, in the past, that she doesn’t have communication with her ex and that he no longer has much of a relationship with their kids. In recent months, however, Grammer’s daughter Mason admitted to Page Six that, “It was the hardest time of my life. I changed a lot after that. I had to grow up faster because I had a lot more responsibilities. My dad wasn’t around, so I didn’t see him much, and my mom had such a hard time. I became my younger brother’s mom. Everyone was on edge.” She also said that today, she has good communication with her dad, though her mom and dad no longer speak.

Prior to tying the knot again this Fall 2019, Grammer reflected on her divorce from actor Kelsey Grammer. She took to Twitter, writing, “I don’t begrudge him his happiness. What’s unnerving is that fact I was there to help him get through some of his hardships and supported his career and his sobriety. I was [right] by his side and he acts like I never existed[;] that’s disappointing. We were together through his success.” She continued, “We have two beautiful children from our union and I was blessed to have shared those years of my life with him. We have both moved on. Just wished it ended in a more civil manner.” 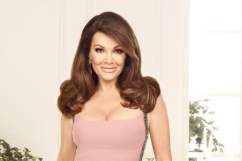 Is Lisa Vanderpump Quitting ‘Real Housewives’? Does She Leave the Show?