There was once a time when anthropomorphic mascots ruled the world of platform gaming.

Rare developed several classics within the genre back on the SNES and N64. Gamers old enough to remember those glory days harken back to games such as Banjo-Kazooie and Donkey Kong 64. Fast forward to 2017 and a time where games such as those two titles are no longer prevalent. Developer Playtonic is looking to change that with the release of Yooka-Laylee, a spiritual successor to Rare’s past works. Fans young and old who want to take part in Yooka-Laylee’s colorful world will see what made those old N64 open-world platformers such a joy.

We’re here to detail every part of Playtonic’s much anticipated project and return to Rare’s mastery of platforming games.

September 8, 2012 – former employees who once worked for Rare made their intentions clear to the gaming world. They set out to develop a spiritual successor to one of Rare’s most standout N64 releases, Banjo-Kazooie. After that announcement was made, an official Twitter handle for the former Rare devs was created (that Twitter handle was “Mingy Jongo,” which was named after a boss from Banjo-Tooie). But suddenly, the Twitter account went quiet and word got around that the team’s dream project was put on an indefinite hiatus.

But later on, that Twitter account returned and was changed to the actual name of the game’s development team – Playtonic Games. Playtonic went on to announce that their project (formerly codenamed “Project Ukulele”) was to be officially named Yooka-Laylee. In order to bring this game to fans of Rare’s past N64 open-world platformers, Playtonic put Yooka-Laylee up on Kickstarter for the sole purpose of asking fans to financially support its development. May 1, 2015 – Yooka-Laylee’s funding page officially opens. The game ended up breaking records after becoming the most funded UK game Kickstarter ever. Yooka-Laylee ended up raising £2.1 million from more than 80,000 backers in a short amount of time.

2. The Game’s Development Team Has Their Roots Tied to Rare’s N64 Gems

As we mentioned before, Playtonic Games is made up of former talent that were once a part of Rare. A majority of the developer’s team members have done extensive work with games such as the Donkey Kong Country and Banjo-Kazooie series, plus titles such as Grabbed by the Ghoulies, Kameo: Elements of Power and Perfect Dark Zero. A few of Playtonic’s most important team members includes Project Director & Software Engineer Chris Sutherland, Managing Director & Creative Lead Gavin Price and Character Art Director Steve Mayles. You can check out Playtonic Games’ development team lineup and their associated positions at the following link. 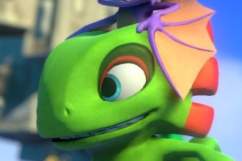 3. Yooka-Laylee’s Gameplay is Inspired by Classics Such as Banjo-Kazooie and Donkey Kong 64

Yooka-Laylee shares a lot of its mechanics with Banjo-Kazooie. For instance, the game’s main characters are a duo of anthropomorphic heroes. Yooka’s a male chameleon who can venture around the game’s massive worlds by running, rolling up hills, tail-whipping enemies, eating butterflies to survive etc. His companion is a snarky bat named Laylee, who also lends a hand by helping Yooka soar through the sky and perform other tasks. The “collectathon” elements of Rare’s past N64 titles is present here as players set out to collect various items. The most important of those collectibles are the “Pagies,” golden book pages that serve as a form of currency. They help unlock new worlds for players to explore and also expand previously explored areas.

Along with getting introduced the game’s main heroes, you’ll also come into contact with a bevy of outlandish personalities. Each of these friends and enemies enter conversations with Yooka and Laylee by speaking in their own form of character gibberish. Trowzer, a merchant who sells new abilities to the main heroes, is actually a talking snake who’s comically outfitted in ill-fitting pants. The many individuals you’ll come across tend to introduce new missions for you to complete, which is something that harkens back to the gameplay present in Rare’s N64 platformers. You can check out the video above and see just a few of the faces you’ll become familiar with in Yooka-Laylee.

Another old-school feature that Yooka-Laylee adopts is an emphasis on local multiplayer. The 2-player co-op mode allows the 1st player to wield the abilities of both Yooka and Laylee, while the 2nd player takes command of a character who offers them additional assistance. On the other end of the multiplayer spectrum lies a competitive mode. Up to four players can compete against each other across eight unique minigames. Each of those games can be accessed from a special area called “Rextro’s Arcade.” The video shown above details each of the competitive multiplayer games you can take part in.

5. Pre-Ordering Yooka-Laylee Gets You Access to the Toybox Experience

Pre-ordering Yooka-Laylee means you’ll be gifted with one of the best downloadable bonuses we’ve ever come across – an extensive demo that showcases the game’s massive potential. The game’s Toybox Experience is a sandbox area designed to give players a sample of what will be included in the final release. Certain platforming props, collectibles and hard-to-find secrets exist within the Toybox and gives players a leg up on learning the game’s mechanics before release. Yooka-Layley will launch on a myriad of consoles (PS4, Xbox One, Nintendo Switch and PC) on April 11. 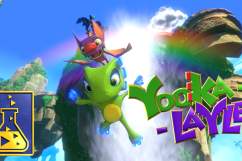