Diane O’Meara, the woman whose Facebook photos were used in the Manti Te’o girlfriend hoax, granted an exclusive interview to the TODAY show. O’Meara broke her silence this morning and let everyone that she is simply a victim of identity theft.

While speaking with NBC News correspondent Miguel Almaguer, O’Meara said she has never met Te’o and she doesn’t have a personal relationship with him either: 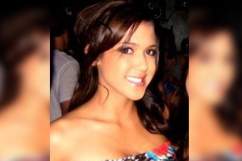 O’Meara also spoke about her relationship with Ronaiah Tuiasosopo, the man allegedly behind the hoax:

The past five years, he’s literally been stalking my Facebook and stealing my photos. Ronaiah has called and, not only confessed, but he’s also apologized. But, I don’t think there’s anything that he can say to me that would fix this.

She also made sure to note that she and Tuiasosopo were never close while they both attended the same high school. The entire TODAY show interview can be seen above.

Manti Te’o, the Notre Dame football star in the middle of all this controversy, will sit down for an on-camera interview with Katie Couric.

The interview will air this Thursday on the Katie show.