Would it be crazy if one of the episodes of Family Guy predicted the Boston Marathon bombing? The episode in question, titled “Turban Cowboy,” has taken Twitter by storm, with conspiracy theorists claiming it may have been a warning in disguise.

Check out some quick facts on what prompted this convoluted theory.

1. A YouTuber Edited the “Turban Cowboy” Episode so it Mirrors the Boston Marathon Bombing

In a March 17 episode of Family Guy called “Turban Cowboy,” Peter Griffin befriends a Muslim named Mahmoud and unknowingly gets involved with a terrorist plot to blow up his town’s bridge.

In a YouTube video, a user mashes two clips together showing Peter being interviewed by Bob Costas about winning the Boston Marathon and another one showing Peter mistakenly blowing up the bridge after making a phone call.

As with all the conspiracies this guy comes up with, radio host Alex Jones points out on his Twitter page that the March 17 episode of Family Guy predicted the Boston Marathon attacks. According to InfoWars, the conspiracy theorist first mentioned the video after claiming that the attack was a false flag operation by the FBI. The radio host tweeted, “Family Guy Episode Predicted Boston Marathon Attack.” 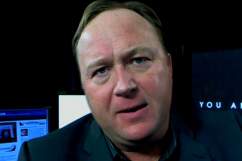 In response to Alex Jones claims, Family Guy creator Seth MacFarlane went on Twitter saying that circulating broadcasts of the same episode would have some parts edited out so that viewers won’t see the resemblance. Seth tweeted, “The edited Family Guy clip currently circulating is abhorrent. The event was a crime and a tragedy, and my thoughts are with the victims.”

4. The Clip is Clearly a Total Fake

Those of you who have watched the full episode can immediately tell that the video was a fake — two separate clips of the episode were mashed together. The actual airing of the episode showed Peter telling Bob that he won the marathon by driving his car into one of the runners, thus killing him. Even the fake video had the clip of the interview with Peter winning the marathon with his car, not an explosion.

The fake video clip from the Family Guy episode was pulled from YouTube “as a violation of YouTube’s policy against spam, scams, and commercially deceptive content.”