The Duchess of Cambridge has made a round of public appearances the past week and her pregnancy is finally starting to show, much to the delight of royal bump watchers. Here’s what you need to know about the royal baby bump.

It was announced this week that the Queen of England would approve changes “in the coming days or weeks” to the British laws of succession, allowing a first-born heir to become king or queen. This means that whatever gender the Duchess’ child is, he or she will be next in line to the British throne after Prince William.

This will be the first change to the laws in nearly 300 years. Canada has already given its blessing to the changes.

Kate Middleton was in Manchester yesterday, find out what she was up to… bit.ly/ZMkTuR twitter.com/hellomag/statu…

The Duke and Duchess of Cambridge are set to welcome their little Wales sometime in mid-July.

Kate Middleton shows off her growing baby bump. Check it out! twitter.com/CarrieWTHR/sta…

It was widely reported that Middleton will stay with her family in their new Berkshire estate after she gives birth, bucking royal tradition by not employing a maternity nurse or starting the child’s life in a royal residence. Kate’s mother, Carole will reportedly help with the new little one.

After Prince Charles and Prince William, the new baby royal will be third in line to the throne. 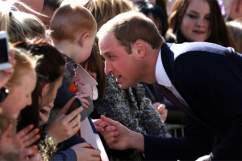 The Duchess made a now infamous slip-up while on royal tour in Grimbsy after a well-wisher handed her a teddy bear, reportedly saying, “Thank you. I will take that for my d…” before quickly breaking off.

When asked directly if they knew the gender of their baby, Middleton replied, “No… we don’t know.”

Read More
British Royalty, Kate Middleton, Pregnancy, Prince William, Royal Baby, Royal Family, Royalty
The Duchess of Cambridge has made a round of public appearances the past week and her pregnancy is finally starting to show. Here's what you need to know about the royal baby bump.