He faces six charges, which include first-degree murder and five gun-related charges.

Hernandez is innocent until proven guilty; all charges are alleged, and all details come from the presentation made by Prosecutor Bill McCauley. The documents are sealed.

Here are the most shocking and crucial revelations from his arraignment, which took place this afternoon in Attleboro (Massachusetts) District Court after Hernandez was arrested this morning at his mansion in Attleboro. 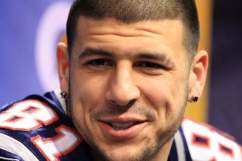 1. Hernandez Was “Upset” With Lloyd for Talking to the Wrong Crowd

Prosecutor: Hernandez told Lloyd he was upset Lloyd talked to some people he was having "trouble" with at a nightclub.

It all started over a beef that Hernandez had developed with a group at a bar called Club Rumor in Boston on the Friday before Lloyd was killed. According to prosecutors, this “upset” the former-Patriot. 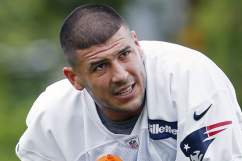 To be clear: DA's saying #hernandez shot Lloyd three times right after Lloyd got out of the car. Then stood over him & put two in his chest.

It’s being alleged that Hernandez “orchestrated” the entire murder. Today it was said in court that the former Patriot shot Lloyd twice, fatally, and then stood over him and shot him three more times.

3. Hernandez Was Caught on Camera Carrying a Gun When He Returned Home the Night Lloyd Was Killed

Hernandez can be seen on surveillance footage from across the street walking into his home, carrying a gun. This was after the time that investigators believe Lloyd had been killed. TMZ posted this picture on their site of Hernandez. They allege the photo was taken in 2009:

Previously in the investigation, it was discovered that six to eight hours worth of security video from the night Lloyd was killed was wiped from Hernandez’s security system.

4. Hernandez Left a Shell-Casing in the Rental Car he Returned

Rental car agent found shell casing and a piece of gum Hernandez had purchased at convenience store under seat in rental car.

A shell casing matching the caliber of the weapon that killed Odin Lloyd was found under a seat in a rental-car that Hernandez returned.

5. The Murder Weapon is Missing

Prosecutor: several guns were found in search of #Hernandez home but not murder weapon #wbz

The prosecution does not have a murder weapon, but .45 caliber ammunition recovered from Hernandez’s home matches the gun that would have killed Lloyd.

6. Hernandez and Lloyd Were Texting on the Fateful Night

2:32.. Hernandez text Lloyd outside his home " we are here". Sister watches as Odin gets in silver Nissan .

According to prosecutors, Hernandez’s recovered phone had texts to Odin Lloyd on it. Hernandez was arranging to pick up Lloyd on the night the murder took place.

7. Lloyd Sent His Last Text to His Sister, Asking if She Had Seen Him With Hernandez

Final text from Lloyd to his sister after telling her that he was with #Hernandez: "Just so you know."

After leaving the bar on Sunday, prosecutors say that Lloyd texted his sister to ask if she had seen who he was with, when she asked who, he replied, “NFL,” followed quickly by, “Just so you know.”

8. Hernandez is Being Held Without Bail

UPDATE: Aaron Hernandez will be held without bail on murder charge.

Prosecutors argued that his wealth made him a flight-risk, whereas Hernandez’s lawyer said that his domestic commitments as well as his celebrity would make it impossible for him to flee.

9. There’s a Gag Order for All Involved

Hernandez held without bail. Attorney asks for gag order based on media leaks.

There will be no media interviews from witnesses, lawyers or anyone involved in the case.

Hernandez charged with Murder, Unlawful possession of a firearm, Possession of a large capacity firearm. Invest ongoing. No further updates.

While the murder weapon is missing, two additional firearms were found at the Hernandez home — a “large-capacity” firearm (the possession of which is a crime in Massachusetts) and a .22 handgun. “Large capacity” means a feeding device (magazine) holding more than 10 bullets.