2013 has not been a good year for your constitutional liberties. From Bradley Manning to Anwar al-Awlaki, from PRISM to water-boarding, the past year has seen your liberties being chipped away by the federal government bit by bit. This list a circling of the wagons, an evaluation of the damage that has already been done by all branches of our government.

Here are the Constitutional Amendments currently under attack and how:

Congress shall make no law respecting an establishment of religion, or prohibiting the free exercise thereof; or abridging the freedom of speech, or of the press; or the right of the people peaceably to assemble, and to petition the Government for a redress of grievances.

How It’s Under Attack:
Of all of the rights the First Amendment ensures, the freedom of the press is the one that has been most in jeopardy this year. America discovered earlier this year that Attorney General Eric Holder personally signed off on the investigation of a number of journalists, including Fox’s James Rosen.

Rosen’s case, like a number of other high-profile situations this year, brought in the public discourse the crucial question of what a journalist is allowed to do with leaked classified information. This question seems increasingly crucial for Guardian reporter Glenn Greewald, who first published NSA whistleblower Edward Snowden‘s classified documents pertaining to the NSA’s massive phone and Internet surveillance programs. Over the past month, Greenwald has withstood outcries from government officials as well as fellow journalists accusing him of breaking laws and treason.

A well regulated Militia, being necessary to the security of a free State, the right of the people to keep and bear Arms, shall not be infringed.


How It’s Under Attack:
In one of the more controversial issues of the year, the Second Amendment’s ambiguity has allowed some Americans to argue that high-powered assault rifles fall under the rights covered in the Constitution. With high profile gun violence filling American newspapers, some states, like Connecticut, have been passing stricter and stricter gun control and regulation laws. Although the right to bear arms is not nearly as close to being extinct as some of the other rights on this list, the days of “anything goes” gun ownership in the United States may be at an end.

The right of the people to be secure in their persons, houses, papers, and effects, against unreasonable searches and seizures, shall not be violated, and no Warrants shall issue, but upon probable cause, supported by Oath or affirmation, and particularly describing the place to be searched, and the persons or things to be seized.

How It’s Under Attack:
The Fourth Amendment means that the government cannot acquire information about you without having a reason and also requires having a judge certify that suspicion with a warrant. The illusion of this right was shattered when Edward Snowden revealed, by leaking classified NSA documents, that the government has been amassing phone metadata (call numbers and call durations) and records of Internet activity for almost every American. Although President Obama has claimed that government officials still need a warrant to access that information, the collection of this data alone seems enough to put the Fourth Amendment at the top of the endangered list.

No person shall be held to answer for a capital, or otherwise infamous crime, unless on a presentment or indictment of a Grand Jury, except in cases arising in the land or naval forces, or in the Militia, when in actual service in time of War or public danger; nor shall any person be subject for the same offence to be twice put in jeopardy of life or limb; nor shall be compelled in any criminal case to be a witness against himself, nor be deprived of life, liberty, or property, without due process of law; nor shall private property be taken for public use, without just compensation.

How It’s Under Attack:
With all of the Supreme Court decisions being churned out, one went relatively unnoticed. Last week’s ruling Salinas v. Texas puts the Fifth Amendment on our endangered list. Texas man Genovevo Salinas had not been arrested when he was questioned by police officers about a crime, so he felt comfortable answering their questions voluntarily. However, once a question made him uncomfortable he stopped responding. The police used Salinas’ silence in court to signify a confession of guilt.

The Fifth Amendment allows any person safety from self incrimination, meaning a person does not have to answer a question if he believes it will get them into trouble. The Supreme Court also decided in 1965 that in Griffin v. California that the government could not use a person’s use of the Fifth Amendment and their unwillingness to testify as evidence of their guilt. Last week’s ruling adds the caveat that if the person does not specifically express that they are utilizing the Fifth Amendment, their silence can be used as an admission of guilt. Know your rights! 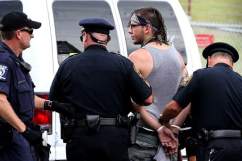 Bradley Manning being escorted out of a courthouse in Fort Meade, Maryland. Manning is charged with aiding the enemy by causing hundreds of thousands of classified documents to be published on WikiLeaks.

In all criminal prosecutions, the accused shall enjoy the right to a speedy and public trial, by an impartial jury of the State and district wherein the crime shall have been committed, which district shall have been previously ascertained by law, and to be informed of the nature and cause of the accusation; to be confronted with the witnesses against him; to have compulsory process for obtaining witnesses in his favor, and to have the Assistance of Counsel for his defence.

How It’s Under Attack:
Bradley Manning, the infamous 25-year-old Army private who leaked thousands of classified diplomatic cables to Wikileaks in 2010, has been held in prison for nearly three years without a trial. As you can see above, the Sixth Amendment ensures “speedy” trials for the defendant. This means that a person cannot be held in jail indefinitely without being charged and convicted. Manning is only now beginning a trial process, which could end in a death sentence for espionage and aiding and abetting the enemy.

Unlike Manning, Anwar al-Awlaki was killed by the U.S. government without a trial. The American citizen, radical Muslim Cleric, and supposed terrorist mastermind, was killed along with his son in a drone attack in September 2011. Neither was given a trial. President Obama recently justified this killing by saying his terrorist activity made him no different than “a sniper shooting down on an innocent crowd.”

Excessive bail shall not be required, nor excessive fines imposed, nor cruel and unusual punishments inflicted.

How It’s Under Attack:
Waterboarding is not new this year, but its legacy lingers within the American system and shows the American people how willing our government is to commit egregious acts of violence in the name of security. This concern is only reaffirmed by the appointment of James Comey as President Obama’s new FBI director. Comey served as the Deputy Attorney General under former President George W. Bush, and his fingerprints were all over “enhanced interrogation techniques” such as waterboarding.

Men standing at a voting rights march in 1965. (Getty Images)

How It’s Under Attack:
You can blame the Supreme Court for this one. Just today, the justices decided in a 5-4 vote to scrap section 4 of the monumental 1965 Civil Rights Act. Section 4 was created in 1965 to ensure that racist areas of the South could not create laws that barred or hindered racial minorities from voting. The section stated that all laws pertaining to voting passed in certain (historically racist) areas of the country had to be approved by the Department of Justice in Washington, D.C.

This comes decision comes in the wake of scandals from across the country emerging from the 2012 presidential election where voters in inner-city and minority-populated areas claimed that their attempts at voting were suppressed by new voting requirements, long waits and “unforeseen” circumstances.

Are we doomed to live in a country with slowly dwindling rights? Or can American possibly pull itself together enough to get these Amendments off of the “endangered list”? 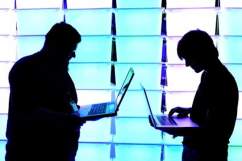 Loading more stories
wpDiscuz
1
0
Would love your thoughts, please comment.x
()
x
| Reply
The last few years have seen the U.S. Constitution constantly under fire from all branches of government. Here is a list of all of the Amendments under attack.