A man in a wheel-chair was one of those targeted by a brutal crack-down from Turkish police in Taksim square. As the handicapped protestor attempted to move away from riot police vehicles he was hit with a burst of water. But perhaps the most remarkable part if the clip is that even after being shot with the water canon — the man triumphantly continued waving his flag before moving away towards the thick cloud of smoke, vapor and tear gas.

Istanbul’s Taksim square has become a war zone as police clash with anti-government protestors. Rubber bullets, water canons and tear gas filled the air. Clashes have intensified as this marks the return of heavy-handed tactics by Turkish authorities. Videos such as the one featured above have been surging from Turkey — depicting images of police brutality. Click on the link below to get the full story: 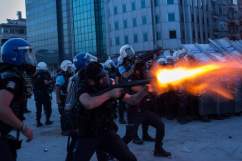 Loading more stories
wpDiscuz
0
0
Would love your thoughts, please comment.x
()
x
| Reply
The man keeps waving his flag after he is blasted with a water canon.