The video of the incident (which can be seen above) shows the rapper suddenly dropping to floor during his performance.

Daleste was shot in the stomach. It’s unclear at this time if he was shot once or twice. He was pronounced dead at a local hospital.

Police are treating the incident as a murder, and they are studying footage to find from which the direction the bullet[s] came from.

3. Daleste Was Not Known to Have Any Beefs

There are currently no suspects. The rapper is not known to have enemies. His show was being performed in a housing project. His father, Roland Pellegrine, said of his son:

It was a very good boy, a boy charismatic, docile. He had no enemies.

4. His Death Spurred an Outpouring of Emotion on Social Media

A Facebook tribute page to Daleste has 300,000 likes at the time of writing. 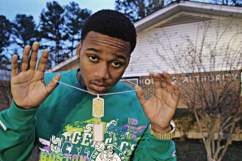 This comes after weeks of turmoil in Brazil. On the back of the large-scale unrest on going in the country. Campinas, where Daleste was shot, is a suburb of the city of Sao Paolo, where most of the protests are happening.

6. It’s the Second High-Profile, Heinous Murder in Brazil in a Week

On June 30, a soccer referee got into a fight with a player, stabbed the player dead and was then beheaded by a mob.

7. Daleste Will Be Laid to Rest Today

He was buried in Vila Formosa, the largest graveyard in Latin America. Throngs of fans followed the funeral precession, singing his songs while they mourned.

The crowd that gathered to celebrate the slain rapper’s life was so large, they were corralled by Sao Paolo police. A section of the cemetery was closed off, but fans still attempted to gain access to the memorial through another entrance.

Daleste was based in Sao Paolo and was known as a “funk rapper.” The scene in the city is known as “Ostentatious Funk.” Billboard reports the genre is …

… a bling-obsessed and violent brand of rap over looped beats. Also called Sao Paulo funk, the club genre is an offshoot of Rio’s Funk Carioca, rooted in that city’s impoverished favelas.

9. His Father Believes he Was Killed Out of Jealousy

Daleste’s father believes his son was murdered because “of the resentment of his rivals,” according to a report by Brazilian news service G1.

His death will further highlight the gang and gun crime that is endemic in Brazilian society.