Robert Caldwell, 23, is one of the Granite Mountain Hotshots out of Prescott, Arizona, who perished battling the Yarnell Hill Fire that also claimed the lives of 18 of his colleagues.

Here’s what you need to know about this hero…

1. He Was From the Philadelphia Area

Photo: Friends of 23 y/o Robert Caldwell become emotional as he is named as one of 19 killed @azcentralPhoto pic.twitter.com/gStbteQEmt

Caldwell was born in the small town of Richboro in Bucks County, Pennsylvania. Caldwell’s family moved to Arizona about 18 years ago.

2. He was the Cousin of Another Hotshot

Adding to the already close-knit group that was the Granite Mountain Hotshots, Caldwell was bonded to fellow Hotshot Grant McKee by blood. The two were first cousins, and the Caldwell family is grieving for both of the fallen firefighters. 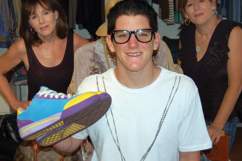 Robert Caldwell’s wife, Claire, whom he married last November, provided one of the saddest pictures from Monday night’s memorial service in Prescott. The above picture shows Claire Caldwell weeping. Caldwell reportedly loved and was a great father to Claire’s son and his stepson, Zion, 5.

Pay tribute to a hero.

4. He Was a Die-Hard Philadelphia Sports Fan

According to an NBC interview with Robert Caldwell’s father, he and his son regularly returned to their home state of Pennsylvania to attend Philadelphia sporting events. Caldwell’s father even recalls that at their final dinner together, the night before his son left to go fight his final fire, he was wearing a Philadelphia Phillies shirt that said “Hating the Mets Until I Die.”